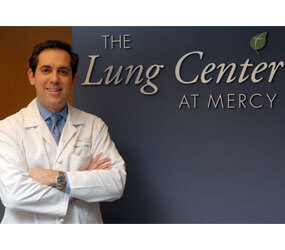 When it came to choosing the Mildred Mindell Cancer Foundation’s Humanitarian of the Year for 2011, it was a no-brainer –at least for the foundation’s then co-president, Susan Manekin.

She nominated Mercy Medical Center’s Dr. Albert Polito. She credits him with saving her life and thinks he is “a wonderful, incredibly caring and brilliant physician and person.”

Manekin’s executive board agreed, and so it was.

“He is the kindest, warmest, most amazing person I have ever met,” Manekin said of the director of Mercy’s Lung Center and chief of its Division of Pulmonary Medicine.

After a “multitude” of physicians had been unable to successfully treat her extremely serious lung disease, Manekin was referred to Polito. On her first visit, he spent three hours with her and her husband, going over medical records, x-rays, and scans, talking to her and then coming up with a treatment plan that put her on the road to recovery.

“In two weeks he turned my life around,” Manekin said. “I had been so sick that my internist and Dr. Polito told me I shouldn’t be alive today and they are amazed that I am completely cured.”

Normally, the Jewish women’s organization, which has long been a friend and supporter of Mercy, would ask the hospital to nominate a candidate for the humanitarian award.

“This time it wasn’t necessary, we knew who should get the award,” Manekin said.

“It came out of left field, it was a real surprise,” said the 46-year-old Polito.

He is an ardent parishioner of St. Leo in Little Italy, not far from the family’s Fells Point home, along with his wife, Redonda, a fellow physician and the Johns Hopkins Hospital’s chief medical officer, and their two young daughters.

Before the foundation held its third annual “Tasting at the Station” fundraising event in May, at which the award would be presented, Mercy staff contacted Polito’s patients to see if they might want to attend.

“I was overwhelmed that so many of them came, and that they had to pay for it too,” Polito said. “It was incredibly touching.”

Manekin was not surprised by the turnout.

“It was clear that they all loved and admired him,” she said, “and wouldn’t have missed it for anything.”

The grandson of Italian immigrants and the son of a physician – his brother is a physician too – Polito insists that “medicine is the most wonderful of all professions.”

“It’s a privilege to care for someone,” he said. “It’s sad that so much of medicine is a business transaction these days, but I don’t think it has to be.

“Much as we may like to fit medicine in a box – you have ‘X’ disease and you treat it with ‘Y’ – it’s not really that way. It has to be about individualizing how you treat patients, how you listen to them and how you care about them and their concerns as individuals, not numbers.”

Polito acknowledges that his strong Catholic faith has “an extremely important” influence on his life; on how he treats his patients and how he lives his life in general.”

“I grew up in a very Roman Catholic household,” he said. “Faith was always a part of our life. We prayed before meals, we went to Mass on Sunday, and more. It just becomes a part of you and how you live your life, and I hope that it will be true of our children.”

While he enjoyed his earlier years at the Johns Hopkins University School of Medicine, where he was an assistant professor of medicine in the pulmonary and critical care medicine division, Polito is an outspoken fan of Mercy and of the Mercy Sisters, whose charism permeates the downtown Catholic hospital.

“The people here are really so good to each other,” he said. “It’s a kind place to work, and that includes the docs, the nurses and the housekeeping staff. It says a lot about what the nuns do and how they treat everyone.”