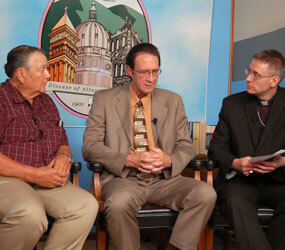 SOMERSET, Pa. – Sept. 11, 2001, was a routine Tuesday morning at the Miller Funeral Home in Somerset. Wallace “Wally” Miller, Somerset County coroner, was in his office and his father, Wilbur, who lived with him, was in his customary place on the couch, watching television.

“Come and look at this,” he yelled to his son. “A pilot must have had a heart attack and crashed his plane into the World Trade Center. How would you like to be the coroner in New York?” he asked rhetorically.

Miller watched for a bit and retreated to his office. A little later, he received a call from Denny Kwiatkowski, Cambria County coroner, asking him about a plane crash near Shanksville.

“I hadn’t heard anything about it and I immediately called the 911 response center and I couldn’t get through,” recalled Miller of that day when his life and the lives of people around the globe would be changed forever. “Luckily, I was able to contact them with a two-way radio, and they told me there was an unconfirmed report of a large plane down near Shanksville.”

He would soon discover that four terrorists had hijacked a United Airlines plane en route from Newark, N.J., to San Francisco. A total of 44 people died, including the passengers, crew members and the terrorists.

The entire country and international community watched in horror as another plane hit the second of the twin towers, and still another crashed into the Pentagon near Washington.

Miller, who also operates a funeral home in Rockwood, was about to be thrust onto the world stage and “no” was not an option.

“As a coroner, I’m the last man to get to the scene of a death. When I got to Shanksville there were state policemen, firemen, FBI, ATF and emergency personnel already at the site,” Miller recalls, “and they all looked to me to orchestrate the disaster recovery.”

He says he felt totally unprepared to handle the situation, but with the help of a few friends, along with his Catholic faith, he was able to establish a morgue in Friedens and a family operations center at nearby Seven Springs Resort.

“I really believe my faith allowed me to deal with Flight 93,” said Miller, a member of St. Peter Parish in Somerset who became a Catholic in 1996.

Michael Svonavec of Svonavec Inc. is the owner of the 300-acre tract of land that became the crash site. His uncle, James Svonavec of J & J Svonavec Excavating, worked closely with the FBI during the crash investigation. They are also members of St. Peter’s.

James Svonavec and his crew had been working on the tract of land at the time, although they weren’t working when the plane was brought down. “The FBI asked to use our fuel to accommodate their generators and portable lights,” he said.

Their next job was to find the black boxes containing the flight data recorder and the cockpit voice recorder.

“I remember looking at the ground and thinking to myself that there couldn’t be a plane in the ground. There wasn’t much of an impression left in the soil,” said James Svonavec.

He saw nothing resembling a plane until he excavated down about 10 feet. Slowly, he began to dredge up bits and pieces of the plane and some of the personal belongings of the passengers. They retrieved items buried 50 feet into the earth.

Miller said the plane hit soft ground at 575 mph near a long wall used in strip mining. The fuselage bounced in a fireball into a stand of hemlocks. Everything was reduced to mostly unidentifiable rubble.

“Pieces of plastic from the main body of the plane hung eerily in the trees burning and melting. I’ll never forget the constant sizzling sound the dripping plastic made in the leaves on the ground,” Miller recalled. “I’ll never forget that.”

Miller and James Svonavec said that during the first two days at the scene they each had a palpable sense of prayers being said for the heroes of Flight 93. “I could almost feel it – the prayers from around the world that were being offered for those that died that day,” Svonavec added.

Miller’s major task was identifying the passengers and categorizing their belongings. “We made a pledge to ourselves that every person on board that plane would be identified,” he said.

Initially, he was able to identify 16 of the 44 people at the scene. The rest were identified through their DNA.

One of the few things found intact at the site was a jacket of one of the terrorists. Inside a pocket they found a piece of paper with a step-by-step itinerary planned by the hijackers for that tragic day.

The personal effects of each of the passengers were taken to the Somerset airport. There they laid them out on the tarmac and photographed each item. They made a catalog for each of the families of the deceased so they could identify the effects of their loved ones.

Both men planned to be on hand in Shanksville to commemorate the 10th anniversary of the Sept. 11 attacks. They will pray for the passengers of Flight 93 who heroically stormed the cockpit of the plane – thwarting a possible attack on the U.S. Capitol building in Washington.