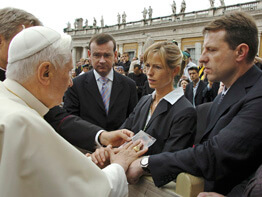 VATICAN CITY – Pope Benedict XVI, meeting the parents of a 4-year-old British girl apparently kidnapped while the family was on vacation in Portugal, blessed a photograph of the little girl and offered his prayers.

Kate and Gerry McCann, the Catholic parents of Madeleine, who has been missing since May 3, met the pope at the end of his weekly general audience May 30 in St. Peter’s Square.

When they handed him the photograph, the pope caressed it.

“His thoughts and touch and words were more tender than we could have imagined,” Gerry McCann told reporters afterward.

“Today, meeting the pontiff was an experience that has very mixed emotions for us,” he said. “In ordinary circumstances, of course, it would be the highlight (in the life) of any Catholic to come and meet the pope, but it is saddened with the very marked realization that our daughter is still missing.”
Throughout the press conference, Kate McCann kept close to her “Cuddle Cat,” the worn pink and white stuffed cat that she said Madeleine insisted on having with her when she went to bed or when she was sad.

She said meeting the pope “was very emotional, but a very positive experience really. It was very important to us.”

“He was very kind, very sincere. He said that he would pray for us and our family and for Madeleine’s safe return to us,” she said.

“I thanked him, first of all, for letting us meet him today and I thanked him for his prayers. It’s been a lovely day. It has been a very positive experience; I think it can really make us stronger and lift us up more,” she said.

Madeleine disappeared May 3 from the hotel room in Praia da Luz, Portugal, where her family was vacationing. The parents had left Madeleine and her 2-year-old twin siblings alone in the room while they went to dinner in the hotel restaurant.

Police believe the girl was abducted.

Gerry McCann told reporters May 30, “We have had tremendous strength from the outpouring of good will we have had from all over the world, but particularly from the local Catholic community in Portugal and from the church which we’ve been attending regularly.

“We know that many people both here and elsewhere are praying for our daughter and that helps us sustain our belief that we can get her back safely,” he said.

“The Catholic faith has given us strength,” he said, but the outpouring of concern and prayers “has restored my faith in humanity as much as anything else.”

“We understand that there are many different scenarios here, but we must believe and we do believe that we can get Madeleine back,” he said.

His wife said, “The first 72 hours (after the presumed abduction) were the worst times. It was very hard to get away from all the dark places, but as time goes on and after the support we have had and the prayers we have had everywhere, it really does give you strength and hope.”

A week before traveling to the Vatican, the couple had gone to the Shrine of Our Lady of Fatima in Portugal to pray for Madeleine’s safe return and have launched a massive publicity campaign in Europe seeking help in finding their daughter.