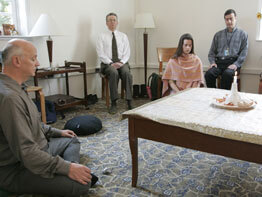 WASHINGTON – In the oldest building on the campus of the United States’ oldest Catholic university, Christian meditation has found a place to take root.

The structure – also the smallest building on the Georgetown University campus – is now home to a meditation center that had for two years before been based in a pair of adjoining row houses one block from campus.

In the center, organized meditation is offered twice a day, although students, faculty and staff can walk into the building at all hours for some moments of silent meditation.

“Ma-ra-na-tha,” counseled Benedictine Father Laurence Freeman, a native Briton, at one recent midday meditation session. He was instructing those present to say the ancient Greek invocation for “Come, Lord” to themselves, inside their heads slowly and evenly, without putting emphasis on any syllable.

“The best way to learn is to practice,” Father Freeman said, as the meditation session had a few first-timers.

Some sat in chairs, some sat on small pillows on the floor and a majority had their footwear off, as they meditated. The hum of an electrical unit – turned on to provide heat in the circa-1792 building – could not drown out the drone of jets taking off from an airport across the Potomac River from Georgetown, or all of the everyday hustle and bustle that goes with being on a college campus.
Meditation, the priest asserted, is “simple. It’s not easy, but it’s simple.”

Although anyone could meditate, not everyone does, said Father Freeman, noting that many Christians have lost touch with this ancient form of prayer.

What’s the reason? “The mind is not attentive,” Father Freeman explained. “It’s very distractive. … Don’t be disappointed if your mind wanders. Someone once described it as a monkey jumping among the branches.”

The Georgetown meditation session was flanked by two readings: one from a Chinese text called “Tao-Ching,” the other by the late Benedictine priest, Father John Main, for whom the Georgetown center is named. 2007 marks the 25th anniversary of Father Main’s death, and his efforts to spread Christian meditative practices have been observed this year with different programs across North America.

Father Main, who believed that the contemplative experience creates community, began the first meditation groups at his monastery in London and, later, in Montreal. His student and collaborator in these endeavors was Father Freeman, now president of the World Community of Christian Meditation.

In December in Sarasota, Fla., Father Freeman is scheduled to lead a three-day event on contemplative prayer with Trappist Abbot Thomas Keating, the founder of an organization called Contemplative Outreach who helped start the centering prayer movement in the 1970s.

Father Freeman said he believes the meditation center at Jesuit-run Georgetown is unique among U.S. Catholic colleges in that a specific spot on the campus has been reserved for meditation. “It’s right slap-bang in the middle of the campus,” he said with a smile.

“People say to me they’re missing something,” Father Freeman told Catholic News Service in an interview after the meditation service had concluded. “They’re often confused” by unceasing demands placed on them in society and respond by undertaking a “spiritual search,” he said.

The search can begin at any time in life. For some it starts quite early. In the Diocese of Townsville, Australia, 31 Catholic elementary schools have adopted meditation as part of the school routine. “The children like it,” Father Freeman said.

The Georgetown meditation building is far too small to accommodate all who would want to pray. Father Freeman said one purpose of the center is to make those at Georgetown feel comfortable meditating in their dorm rooms or elsewhere on campus.

Father Freeman said he marveled at the energy of Georgetown students who work and study hard yet want to maintain a rich prayer life and embrace meditation as one way to pray. Yet it’s almost natural for someone practicing meditation to doze off. “When you first do it, it’s easy to get drowsy,” he said.

But a verse from Psalm 46 in some versions of the Bible carries a rich reminder about the benefits of meditation: “Be still and know that I am God.”