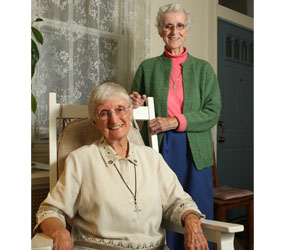 The day to profess their vows as Medical Mission Sisters arrived. It was snowing in Philadelphia and their families were both making a trek from New Jersey.

“I was a nervous wreck,” Sister Jane said with a laugh. “It was a bad storm and I didn’t know if they were going to make it. I was kind of hyper. It was not until everything had died down that I could have a chance to think about it. I said the right things and didn’t stumble up to the altar or fall flat on my face.”

The now-87-year-old women were ready to do God’s work.

“I look at it as a turning point,” Sister Kathleen said. “It was a time of finishing preparation and looking forward to how I was going to be a professed Medical Mission Sister.”

Both were honored Aug. 16 during a Mass at the North American headquarters of their community in Philadelphia for their 60 years of service.

The New Jersey natives have lived in their Baltimore City home off Bel Air Road since 2000 and are the only two Medical Mission Sisters serving the archdiocese.

Sister Jane moved to Baltimore in 1980 and has played an integral role in Baltimore’s Corpus Christi parish since the mid-1980s. She was the pastoral director for 14 years there and became the first woman in the Archdiocese of Baltimore to hold such a position.

The social action committee she formed there now addresses issues such as AIDS, homelessness and mental illness. She played a key role in the Rite of Christian Initiation of Adults program.

“I love the parish,” she said. “It’s such a collaborative effort.”

Sister Kathleen has been working with women prisoners in Jessup, administering the Myers-Briggs Personality Type Indicator, since the mid-1990s.

“I feel it really helps a person understand his or her own gifts,” Sister Kathleen said. “Any woman can receive it.”

Each entered the Medical Mission community in August 1946. Sister Jane was from Atlantic City, while Sister Kathleen hailed from Jersey City. Over the next three years, they prepared for their vows at the order’s rural base in the Fox Chase section of Philadelphia.

Sister Jane had previously worked for the local phone company while Sister Kathleen was a registered nurse who worked in the army corps during World War II.

Each received assignments from the order’s foundress, Mother Anna Dengel, after they took their vows. Sister Jane remained at Fox Chase, while Sister Kathleen was sent to Holy Family Hospital in Rawalpindi, Pakistan.

There, she became a registered midwife and served Muslim women and children. She also taught at a local nursing school.

“I loved being there,” Sister Kathleen said. “It’s where I wanted to be – in the midst of people who were really needy.”

Some Muslims were curious about the role of a nun. When Sister Kathleen explained she was there to care for others, they would often say, “Ah, you are God’s servant then.”

She was also working in an Atlanta hospital when Martin Luther King Jr. was assassinated in 1968. She saw people of various races pull together amidst tragedy.

She also worked with unwed, pregnant mothers when society often shunned them. Sister Jane, who is not medically trained, taught the women sewing and craft-making and would take them out on picnics in Philadelphia.

She built bonds with the women, many of whom were young.

“Most of them were good kids,” Sister Jane said. “They badly needed all the compassion, care and help you could give them.”

The joyous part, for her, was seeing families adopt those mothers’ children.

Throughout the years, both sisters barely saw one another. Their assignments called for them to crisscross the world. Each served in England and various locations the United States.

They have found a home in Baltimore, where they can carry out the vows they took 60 years ago.

“I feel very grateful to be of some help to other people and bring some hope and healing to others,” Sister Kathleen said.

Sister Jane often asks, “Why does God have me here?”

“God has me here for a purpose,” she said. “We are blessed and we know it.”