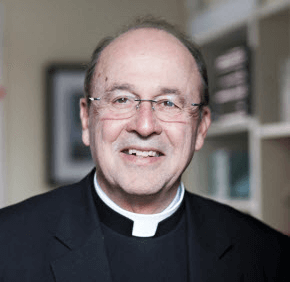 Two months into a three month sabbatical in Rome in early 2006, Monsignor Arthur F. Valenzano was diagnosed with a form of leukemia.

“It was happening quickly,” said Monsignor Valenzano, rector of the Basilica of the National Shrine of the Assumption of the Blessed Virgin Mary in Baltimore, who at the time was meeting priests and enjoying lectures. “I was too ill to come home.”

After two rounds of chemotherapy during a 40-day stay in a Rome hospital, Monsignor Valenzano boarded a 10-hour flight to the United States. He believed that he was in remission, but was not.

After returning to Baltimore, he began treatment at The Johns Hopkins Hospital, but another round of chemotherapy wasn’t the answer. He needed a costly bone marrow transplant.

During his illness, Monsignor Valenzano benefited from The Monsignor Daniel McGrath Endowment Fund, which funds the medical needs of priests. It operates under the auspices of the Archdiocese of Baltimore’s Catholic Community Foundation, a nonprofit organization established in 1998.

Its assorted endowment funds support the archdiocese; Catholic school/education and youth ministry; outreach to the poor and those in need; parishes; multipurpose funds; and pertinent to Monsignor Valenzano, the clergy.

The Monsignor McGrath fund honors the memory of a priest who died in 1990.

Monsignor McGrath attended St. Mary’s Seminary on Paca Street in Baltimore, was ordained a priest in 1935 at the Basilica of the National Shrine of the Assumption of the Blessed Virgin Mary in Baltimore by Archbishop Michael J. Curley.

Monsignor McGrath served at St. Ann and St. Francis of Assisi, both in Baltimore, St. Peter in Hancock and St. Mary in Hagerstown. He was archdiocesan director of the Legion of Decency, a U.S. Army chaplain and dean of Carroll, Frederick and Washington counties.

The Monsignor McGrath Fund was established in 2005 and originated in the Heritage of Hope Campaign, an archdiocesan capital campaign. Miscellaneous contributors continue to give to the fund, said Patrick Madden, the foundation’s executive director.

Monsignor Valenzano, who called the fund “discreet,” said “the help was given and nobody had to know about it.

“It’s comforting to know the archdiocese is there,” said Monsignor Valenzano, 63.

Monsignor Thomas J. Tewes, a retired Archdiocese of Baltimore priest who cared for Monsignor Valenzano during his hospital stay in Rome, said the fund is a great source of comfort to priests.

Despite his health concerns, Monsignor Valenzano remains “a very positive person, a man of very deep and strong faith,” Monsignor Tewes said. “He’s a man who is very loyal to the church. He loves the people he serves.”

For more information about the Catholic Community Foundation, visit ccfmd.org/