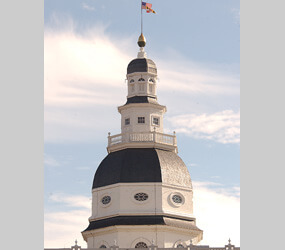 In her inaugural year as executive director of the Maryland Catholic Conference, Mary Ellen Russell and her staff helped pass landmark legislation in Annapolis this legislative session.

With the urging of the MCC, lobbying arm of the state’s Catholic bishops, lawmakers approved significant restrictions on the death penalty. They voted down a measure that the MCC feared would have financially devastated Catholic institutions. And lawmakers passed a $2 million increase to the textbooks and technology loan program for students in nonpublic schools.

There were also disappointments throughout the 90-day session. Lawmakers ignored MCC pleas to limit state funding for stem-cell research to forms that don’t destroy human life. They also did not approve a long-sought business tax credit that would have benefited children and teachers in nonpublic and public schools.

At the April 13 close of the 2009 session of the Maryland General Assembly, Ms. Russell spoke with The Catholic Review about some of the ups and downs in Annapolis.

Q. The session started with another attempt to extend the statute of limitations on sexual abuse civil cases. You had great concerns that this bill would harm the church. Why do you think this bill keeps coming back when it consistently gets voted down? What is the key reason for the church’s concern?

A. I think, sadly, the reason it comes back has more to do with the national effort fueled by out-of-state trial lawyers to pass legislation that’s extremely lucrative to their interests. It’s something we continue to see around the country. My hope is that here in Maryland those efforts will soon come to an end.

It’s clear lawmakers recognize the unfairness of the legislation – the fact the legislation does nothing to protect children and the grave harm it would cause to the ministries of our church and other private institutions.

In addition to the terrible harm it would cause the church’s ministries, I think a real concern of ours is that the legislation diverts attention from the extremely effective measures the church has put in place to genuinely protect children, identify the warning signs of abuse and prevent this terrible harm from happening in the first place. That’s where we ought to be focusing our efforts.

Q. What role did the Catholic community play in defeating the measure?

A. I think the success of the efforts to defeat this measure came from an admirable effort on the part of Catholic parishes, including pastors and parishioners in making their voices heard and making clear they understood how unwarranted the measure was and how clearly it targeted the church.

Q. The MCC and the bishops have worked very hard for many years to abolish the death penalty and there were significant restrictions on capital punishment that were approved this year. What made the difference?

A. The progress that was made is laudable, and while we will continue to advocate for full repeal of the death penalty, it’s a comfort to many in that movement to know that we have a measure that’s one of the strictest in the country in limiting the application of the death penalty.

Education continues to make a difference, especially in the Catholic community. More people understand why the church opposes the death penalty, and within and outside the church, people admire the consistency of the church’s pro-life message. The leadership of Gov. (Martin J.) O’Malley made a significant difference in the success of the effort this year.

Q. Do you think we’ll ever see an end to the death penalty in Maryland?

A. I do. But I think it’s clear to most people that it might not happen until after the next election.

Q. On another life issue, the MCC was unsuccessful in restricting funding for stem-cell research to the forms that do not destroy human embryos. What is it going to take to change minds on this issue?

A. I think what may change minds more quickly than the fact that embryonic stem cell research is so problematic morally is the fact that it’s so far proven to be completely ineffective. As research continues in the field of adult stem- cell research and more success is found through that path, this other avenue will be abandoned.

As society goes down the road of ignoring the morality of this kind of research, the problematic nature of its application is going to become clearer. Once we’ve crossed that line, it’s very difficult to answer the question of when it should it stop. At what point do we allow the embryo to develop and decide now it is no longer moral to perform these experiments?

Q. BOAST (Building Opportunities for all Students and Teachers in Maryland), a proposed business tax credit benefiting children and teachers in nonpublic and public schools, couldn’t get out of a House committee this year. Why is this measure so important?

A. I think the urgency of the challenges facing our Catholic schools is a very evident reason for the importance of passing a measure that would help increase scholarship assistance to our lower- and middle-income families. What’s truly frustrating is the fact that there are a still a few lawmakers who refuse to recognize that those challenges will have a significant economic impact on Maryland taxpayers as well.

Q. But BOAST made a lot of progress this year with more lawmakers offering support?

A. Yes. We’re very pleased that not only do we have more members of the Legislature pushing for the tax credit, but that the governor’s office is openly supportive of the measure and that will make a difference next year.

Q. The MCC was able to convince the governor to increase funding for the textbook and technology program to $4.4 million. Are you optimistic that funding will eventually be fully restored to the $6 million level from when it was first proposed several years ago?

Q. What do you make of the compromise that lawmakers reached on driver’s licenses for immigrants?

A. In the end, the compromise was the best anyone would be able to get out of the Legislature, and it does provide in a very limited way some assistance to undocumented immigrants who need to drive in order to accommodate the needs of the their daily lives and their families. I think the real hope remains that by the time their ability to drive expires in 2015, this problem will be addressed at the federal level with immigration reform.

A. We are if people don’t get involved and speak up. I don’t think it has to be inevitable at all. I think the problem is no one wants to be accused of discriminating against people we care about and the job of the church in this area is to provide respectful, articulate and rational arguments why the state’s definition of marriage should remain as being between one man and one woman.

Q. You have worked for the MCC for many years, but this was your first legislative session as executive director. What was it like and what do you think was the MCC’s biggest achievement this year?

A. My experience confirmed what I knew walking in: that I’m working with a wonderfully supportive and talented team here at the conference. I’m fortunate to rely on the generous and supportive interest of our bishops, archdiocesan staff, pastors and parishioners.
Legislatively, one of biggest achievements was passing the bill to significantly limit the death penalty. In a more general way, one of the continuing achievements is that we bring a consistent message to the Legislature that is truly bipartisan and based on upholding principles that aren’t diverted by the political considerations that derail issues in the public square.