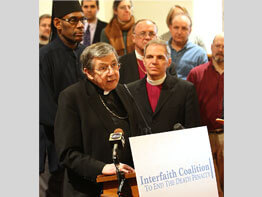 Gov. Martin J. O’Malley may help break a logjam in the Senate Judicial Proceedings Committee by introducing his own legislation repealing the death penalty.

The governor announced last week that he intends to push his own version of the long-sought bill – a first in his more than two years in office.

Previous efforts by lawmakers to do away with capital punishment have been stymied in the Senate Judicial Proceedings Committee where repeal is one vote short of making it to the Senate floor. The governor and Auxiliary Bishop Denis J. Madden were among the high-profile supporters of an earlier repeal effort that was voted down in committee.

“I think the governor’s involvement is very welcome, and I hope it’s a very influential boost to the effort,” said Mary Ellen Russell, executive director of the Maryland Catholic Conference.

Ms. Russell was less enthusiastic about the governor’s suggestion in The Baltimore Sun that the issue may ultimately be decided in a referendum.

Noting that the death penalty is unevenly applied on the basis of race and geography, the Maryland Commission on Capital Punishment issued a report in December recommending abolition.

“I think one of the most compelling findings of the commission was the fact that there was substantial risk of an innocent person being executed,” said Ms. Russell, who represents Maryland’s Catholic bishops in Annapolis. “That very fact alone, not to mention all the other reasons, should persuade us that this law needs to go.”

“The death penalty has failed the people of Maryland,” she said, “and the governor’s decision today symbolizes his commitment to smarter and more effective public safety policy.”