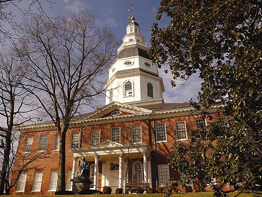 ANNAPOLIS – With the Jan. 10 start of the 423rd session of the Maryland General Assembly, leaders of the Maryland Catholic Conference have high hopes the new legislature and the newly-elected governor will give attention to issues they believe have been neglected in recent years.
Chief among them are a long-sought repeal of the death penalty, an expansion of programs benefiting the poor, the establishment of a business tax credit to help nonpublic schools and a ban on human cloning.

The political lobbying arm of Maryland’s Catholic bishops will also seek $1 million for a new program aiding women in crisis pregnancies and a restoration of funding to the textbook/technology loan program for students in nonpublic schools.

Although Gov.-elect Martin J. O’Malley will inherit a $1.3 billion surplus when the Democratic mayor of Baltimore leaves City Hall for Annapolis Jan. 17, long-term structural deficits are projected for coming years as the gap between revenues and spending is expected to widen.

That will mean MCC leaders will spend much of their time convincing lawmakers to spare the poor and vulnerable from the budget-cutting ax.

Richard J. Dowling, MCC executive director, said he is very optimistic that capital punishment might finally be abolished in Maryland after many years of futile efforts to get rid of it.

While outgoing Gov. Robert L. Ehrlich Jr. was an ardent supporter of the death penalty, Gov.-elect O’Malley told MCC leaders before the election he wants society to evolve to the point “where we understand and accept both morally and intellectually that capital punishment doesn’t prevent crime or homicides.” Yet Gov.-elect O’Malley said he has the duty to uphold the law.

Bills are expected to be introduced in the House of Delegates and State Senate abolishing the death penalty – although Mr. Dowling acknowledged that such a hot-button issue will make many lawmakers “very tentative” about venturing into the debate.

“My unconfirmed hunch is that Gov.-elect O’Malley won’t take a leadership role on the repeal of the death penalty,” said Mr. Dowling. “But I think he won’t stand in the way if the General Assembly enacts a repeal. I think he would sign it.”

Mr. Dowling highlighted Maryland’s life-without-parole sentencing option, pointing to a 2005 MCC poll that showed 63 percent of Marylanders view life without parole as an acceptable substitute for death sentences. More lawmakers and citizens need to be made aware that killers who receive life without parole will never walk the streets, Mr. Dowling said.

Promoting a culture of life

Nancy Fortier Paltell, associate director for the MCC respect for life office, will be pushing hard for Gov.-elect O’Malley to include $1 million in his budget for a new abortion-alternative initiative that would support programs that help women in crisis pregnancies. The governor elect has said he was open to the idea.

“Last year, $13 million was spent on family planning clinics (that promote abortion),” said Ms. Paltell. “This is leveling the playing field. It’s a key way to help women and reduce abortions in this state.”
Another top priority this year is enacting a ban on human cloning. With the passage of stem-cell legislation last year, lawmakers made it illegal to allow cloned embryos to live past eight weeks, Ms. Paltell said, but they did not make it illegal to clone human beings.
“Now’s the time to stop it,” said Ms. Paltell. “That’s not how life is supposed to be created. We shouldn’t be creating life so it can be destroyed in science experiments.”
The MCC will also fight an expected proposal to require all pharmacists to dispense morning-after pills even if they have moral or religious objections.

Help for the poor

Given the tight fiscal situation lawmakers will face this year, Julie Varner, MCC associate director for social concerns, said she will let legislators know that addressing poverty is not just a matter of handing out dollars. It’s about cultivating a climate in which low-income people can find work, healthcare, housing and education.

“To get a family self sufficient, we need help in several areas,” said Ms. Varner. “These issues must be addressed together or not at all.”

As in previous years, Ms. Varner said her organization will try to win support for a bill tying the minimum wage to the consumer price index so the poor won’t be hurt by price inflation.

“We know these programs cost money,” she said. “But they’re about providing the basics.”
The MCC will oppose efforts to prevent documents such as baptismal certificates from being used as proof of identity for immigrants seeking driver’s licenses.

Mr. Dowling said he believes Gov.-elect O’Malley will be supportive of the anti-poverty agenda. Such efforts were not strongly supported during the administrations of Gov. Ehrlich, Gov. Parris N. Glendening and in the second term of Gov. William Donald Schaefer, Mr. Dowling said.

The credit would provide up to $15 million in state tax credits to businesses that donate to educational scholarship organizations for students attending nonpublic schools that charge tuition equal to or less than the state average per-pupil cost.

It would also provide support to public schools and help both public and nonpublic schoolteachers with their ongoing training.

The MCC wants to see funding for the textbook/technology loan program in nonpublic schools returned to the $6 million level when it was launched in the 2001 fiscal year. Funding dipped to $3 million in later years, but was increased to $4 million by Gov. Ehrlich.