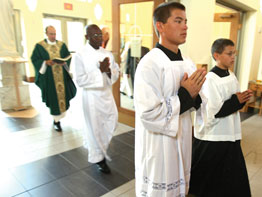 Spotting an altar server who was slightly distracted before the start of a recent Sunday morning Mass, Gus Moreno gently tapped her on the shoulder and gestured toward four fellow servers who had formed a circle in a small vesting room at St. John in Westminster.

“Time to pray,” the 16-year-old leader said with a smile.

While the servers wore black cassocks and unadorned snow white surplices, Gus’s liturgical garb resembled a seminarian’s. Bands of lace ringed the sleeves and hemline of his spotlessly white surplice, subtly setting him apart from the others.

“Open my mouth, O Lord, to praise your holy name,” said Gus, encouraging the younger servers to join in. “Cleanse my heart from all evil and distracting thoughts. Help me to serve worthily at your holy altar.”

The youths invoked the Blessed Virgin Mary, asking her to help them know their vocation in life. With a solid “amen,” Gus then led them into church while the servers kept their eyes glued on him. On his cue, the servers solemnly strode down the center aisle – carrying a gleaming gold processional cross and flickering candles.

The Mass was underway and their work was just beginning under Gus’s watchful eye.

Gus is one of about 20 high school students who serve as masters of ceremonies (MCs) at almost every Mass at St. John. Handpicked by priests, the specially-trained teens act as mentors to the nearly 80 younger altar servers in the parish. They help train the servers and supervise them at Mass, while also assisting the priests and deacons.

Outside the liturgy, the MCs spend a lot of time getting together to talk about vocations and how to be good Christian men. They attend discernment activities and enjoy occasional meals with parish priests. The MCs attend the annual archdiocesan Chrism Mass and priesthood ordination. They even go whitewater rafting and hiking.

Designed by Father Leo Patalinghug, a former associate pastor of St. John who now serves as director of pastoral field education at Mount St. Mary’s Seminary in Emmitsburg, the MC program is meant to help young men grow in faith and leadership. It is geared in a special way to encourage religious vocations.

In operation at St. John and the Cathedral of Mary Our Queen in Homeland for the last several years, the program has already produced three seminarians – one of whom has been ordained a transitional deacon.

Christopher Little, 20, a St. John parishioner who served as an MC starting at age 14, said the program was a “major factor” in his decision to pursue the priesthood. He received special permission to graduate early from Century High School in Sykesville so he could enter Our Lady of Providence College Seminary in Rhode Island.

The seminarian was inspired to become a priest after participating in the Mass in a deeper way as an MC. The program also let him get to know the parish priests and their ministries, he said.

“I got to see the Mass in a unique way and it really transformed my life,” said Mr. Little, who started praying the rosary and evening prayer as an MC.

“Being so close to the Mass, I developed a new appreciation for its beauty,” he said. “I was able to enter more deeply into the mystery of the Mass.”

“I’m reading application files now, and the majority of men who want to be priests speak about their experience serving at the altar as being a major reason for their desire to become priests,” he explained. “It made an impact on their discernment. That’s indisputable.”

The MC program allows boys who may be naturally inclined to the priesthood to experience what it’s like to be a “servant leader,” Father Patalinghug said.

To become an MC, teens must have completed two years as an altar server and receive a recommendation from a parish priest. They also need the permission of their parents.

“We work hard to make sure they know the church’s teachings on liturgy and how to execute their duties with grace and dignity,” said Father Patalinghug. “We don’t want liturgical tyrants.”

Father Patrick Peach, an associate pastor of St. John who coordinates the parish’s MC program with Jim Diggs, said the program fosters a sense of fraternal support and fellowship. He has spoken to the MCs about his own religious vocation.

“The younger servers look up to them,” said Father Peach. “It’s something the young boys look forward to doing when they are older.”

Several altar servers at St. John said they were especially grateful to the MCs on their first day serving Mass. The MCs made the experience less nerve-wracking, they said.

“They are very helpful when you don’t know what to do,” explained 10-year-old Marley Watson.

“They just give us a signal, and we know what’s going on,” she said.

The MCs at the cathedral have the unique experience of serving for Archbishop Edwin F. O’Brien, Cardinal William H. Keeler and the auxiliary bishops on special occasions.

“The guys really enjoy it and they appreciate the opportunity,” said Father Louis Bianco, associate pastor of the cathedral and coordinator of the MC program there.

“They learn all the terminology for what happens at Mass, and they’re on the lookout for things that can go wrong during the liturgy,” he said.

The cathedral currently has 11 MCs and Father Bianco expects to add several more in the coming year.

Priests at St. John and the cathedral said their congregations have warmly embraced the MC program, but it hasn’t been entirely without controversy. While girls are permitted to be altar servers, the MC program is limited to boys.

“The MC program reclaims, respectfully, the tradition of helping a young man see that his vocation may be to the priesthood,” said Father Patalinghug, who hopes parallel programs will be developed to foster church leadership among girls.

“People understand what we’re trying to do,” he said.