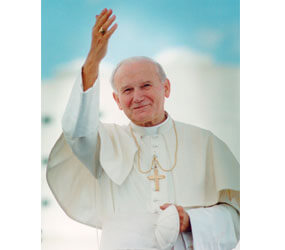 Pope Benedict’s action Jan. 14 followed more than five years of investigation into the life and writings of the Polish pontiff, who died in April 2005 after more than 26 years as pope.

The Vatican said it took special care with verification of the miracle, the spontaneous cure of a French nun from Parkinson’s disease – the same illness that afflicted Pope John Paul in his final years. Three separate Vatican panels approved the miracle, including medical and theological experts, before Pope Benedict signed the official decree.

“There were no concessions given here in procedural severity and thoroughness,” said Cardinal Angelo Amato, head of the Congregation for Saints’ Causes. On the contrary, he said, Pope John Paul’s cause was subject to “particularly careful scrutiny, to remove any doubt.”

The Vatican said it would begin looking at logistical arrangements for the massive crowds expected for the beatification liturgy, which will be celebrated by Pope Benedict at the Vatican. Divine Mercy Sunday had special significance for Pope John Paul, who made it a church-wide feast day to be celebrated a week after Easter. The pope died on the vigil of Divine Mercy Sunday in 2005.

With beatification, Pope John Paul will be declared “blessed” and thus worthy of restricted liturgical honor. Another miracle is needed for canonization, by which the church declares a person to be a saint and worthy of universal veneration.

The Vatican spokesman, Jesuit Father Federico Lombardi, summed up much of the sentiment in Rome when he said Pope John Paul would be beatified primarily for the spiritual gifts of faith, hope and charity that were the source of his papal activity.

The world witnessed that spirituality when the pope prayed, when he spent time with the sick and suffering, in his visits to the impoverished countries of the world and in his own illness “lived out in faith, before God and all of us,” Father Lombardi said.

Brigida Jones, a 26-year-old Australian Catholic visiting the Vatican from Melbourne, echoed the spokesman’s sentiments: “I think he did so much while he was alive, and you’d just see him on television and get this sense of peace – obviously he was holy.”

Father Lombardi said the Vatican was preparing to move Pope John Paul’s body from the crypt of St. Peter’s Basilica to the Chapel of St. Sebastian in the basilica’s upper level at the time of beatification. The chapel, on the right hand side of the church just after Michelangelo’s Pieta, is easily accessible and spacious, an important factor given the steady stream of pilgrims who come to see the pope’s tomb.

Father Lombardi said Pope John Paul’s casket would not be opened at the time of the relocation, and that it would remain closed after it is placed beneath the altar of the chapel. To make room, the Vatican will have to move the tomb of a previously beatified pontiff, Pope Innocent XI, to another area of the basilica, he said.

In 2005, Pope Benedict set Pope John Paul on the fast track to beatification by waiving the normal five-year waiting period for the introduction of his sainthood cause. That seemed to respond to the “Santo subito!” (“Sainthood now!”) banners that were held aloft at Pope John Paul’s funeral.

Even so, church experts needed years to review the massive amount of evidence regarding the late pope, including thousands of pages of writings and speeches. The process began with the Diocese of Rome, which interviewed more than 120 people who knew Pope John Paul and asked them about his actions and character. Studies were conducted on his ministry, the way he handled suffering and how he faced his death.

In 2007, on the second anniversary of the pope’s death, the Rome Diocese concluded the initial inquiry phase. The documents from the investigation were placed in four chests, which were latched, tied with a red ribbon, sealed with red wax and delivered to the Congregation for Saints’ Causes for further study.

In November 2008, a team of theological consultors to the saints congregation began studying the 2,000-page “positio,” the document that made the case for Pope John Paul’s beatification. After their favorable judgment, the cardinal and bishop members of the sainthood congregation met in late 2009 and voted to advance the cause.

On Dec. 21, 2009, Pope Benedict declared that Pope John Paul had lived a life of “heroic virtues.” That meant he could be beatified once a miracle had been approved.

The reported cure of the French nun was carefully investigated by the Vatican’s medical experts over the last year after questions were raised about the original diagnosis. Vatican sources said that, in the end, the experts were satisfied that it was Parkinson’s, and that there was no scientific explanation for the cure.

In 2007, the nun, Sister Marie-Simon-Pierre, spoke to reporters about her experience. A member of the Little Sisters of the Catholic Motherhood, she was diagnosed with Parkinson’s in 2001 at the age of 40. In watching Pope John Paul deteriorate from the effects of Parkinson’s disease, she said, “I saw myself in the years to come.”

When the pope died in 2005, and as Sister Marie-Simon-Pierre’s condition began to worsen, all the members of the Little Sisters of Catholic Motherhood in France and in Senegal began praying to Pope John Paul to intervene with God to heal her.

By June 2, two months after the pope died, she was struggling to write, to walk and to function normally. But she said she went to bed that night and woke up very early the next morning feeling completely different.

“I was sure I was healed,” she said. Not long afterward, she had recovered enough to return to work in Paris at a maternity hospital run by her order.

Several times during the last two years, rumors have surfaced about delays in Pope John Paul’s beatification cause. Various reasons were reported, most having to do with incomplete documentation.

In 2010, with new revelations of priestly sex abuse in many European countries, some Vatican sources said it was the wrong moment to push the sainthood cause of Pope John Paul, who was pope when some of the abuse occurred. But the Vatican’s sainthood congregation continued to methodically process the cause.

A year ago, a book revealed some of the spiritual and penitential practices of Pope John Paul, including self-flagellation and spending entire nights on a bare floor with his arms outstretched. The book was written by Monsignor Slawomir Oder, postulator of the late pope’s sainthood cause, and it prompted some displeasure among church officials because it was based on supposedly confidential material gathered in the investigation process.

Pope John Paul’s death and funeral brought millions of people to Rome, and Vatican officials said they would begin working with the City of Rome in logistical planning for the beatification.