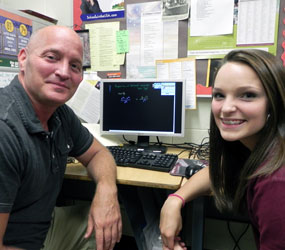 Lindelof, the math department chair, has created and posted more than 300 math lessons on YouTube, the free online video platform.

“I had always thought, wouldn’t it be great if I could just go to each of the students houses and teach – and now I do!” said Lindelof.

After seeing online lessons by an MIT professor, as well as other teachers, Lindelof developed the idea for his own Internet-based lessons.

Since he began posting math tutorials in December 2010, Lindelof’s videos have received more than 21,000 hits.

When asked about his success in creating the lessons, Lindelof defers to the role Bishop Walsh School has played in making the videos possible.

“They have done a great job with this,” Lindelof said. “Bishop Walsh invests in good technology. They are constantly showing they are 100 percent committed to education.”

Although some teachers actually make lessons with a video camera, Lindelof’s system uses a smart tablet, a modestly priced microphone and a program known as Camtasia Studio. Rather than showing Lindelof himself, his videos feature what he is writing on the screen and his voice.

Abigail Workmeister, 14, will be taking Algebra II with Lindelof when she begins her freshman year this fall.

“The videos can fill in the gaps,” said Abigail. “If there is something you forgot to write down or maybe you’re unsure of it, you can watch the videos.”

Lindelof acknowledges that being able to rewind and forward is one of the best assets the videos can offer.

“If they miss what I say, they can back it up and hear it again,” says Lindelof. “If they come to a part they already know, they can move forward to a part that is relevant to them.”

Abigail understands the role that technology is playing in society.

“Technology is just going to keep advancing. It’s better to learn it now, because we are going to need it later on,” she said.

Lindelof has been in education for more than 15 years and has taught at all levels. He did his undergrad work at the University of Maryland and got his master’s degree in education from Trinity University in Washington, D.C. He teaches calculus, algebra and statistics.

“This is the way kids work now. They are very tech savvy,” said Lindelof. “The best thing is when a student will come back and say something critical. It won’t be an attack, but an explanation of how they got the answer, but in a different way.”

Ann Workmeister, mother to Abigail, is also an educator and vice principal of Bishop Walsh School.

“The kids are excited about this because they have ownership in it,” said Workmeister. “They help to create it. They have corrections sometimes and they have ideas they are able to implement in the videos.”

Lindelof has to chuckle when he talks about comments parents have made to him.

“Parents have said that they will call out to get their kids off the computer, then they walk into the room and hear my voice and say, ‘Is that Mr. Lindelof?’ Ok, you can stay on the computer!’”

Ann Workmeister understands the value of being at a school that supports technology.

“Bishop Walsh allots funds and we are able to purchase new technology each year. We also provide training for teachers who are unfamiliar with it.”

In addition to his students watching, Lindelof reports that people from across the globe, in places such as India, Australia, Pakistan, Chile and many other countries, have watched his videos and some will even dialogue with him on the subjects.

His passion for teaching always brings Lindelof back to the subject of education.

“I’m always looking for something that can make me a better teacher,” he said.

Lindelof hopes the use of video tutorials will spread throughout the school.

“The whole idea is for supplemental education,” said Lindelof. “I believe the online lessons increase the students’ interest and their confidence in themselves. Nothing breeds success in math more than success in math.”

You can view Charlie Lindelof’s video lessons by logging onto YouTube and searching “clindelof.”