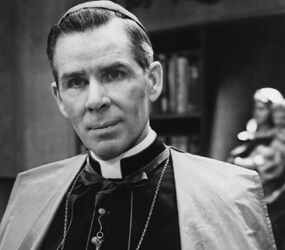 PATERSON, N.J. – A worldwide celebration of Masses Dec. 9 will commemorate the 30th anniversary of the death of famed author, lecturer and television evangelizer Archbishop Fulton J. Sheen, as well as promote his cause for canonization.

Mayer, who is a board member of the Archbishop Fulton J. Sheen Foundation in Peoria, Ill., and president of its advisory council, credits her friend Washburne with conceiving the worldwide Mass idea.

Washburne said it just struck her after hearing the foundation advise that Rome would like to witness an outpouring of support for Archbishop Sheen “from a lot of people!”

“The Mass is our greatest prayer,” she said, “and I can’t think of a better way to dramatize his worthiness for sainthood than big turnouts of people around the globe attending Mass in his memory, all on the same day. That’s public support on a grand scale; hopefully, it will impress Rome.”

She discussed the proposal with Mayer and together they organized a strategy.

The basic approach has been to encourage friends and acquaintances to request commemorative Masses be celebrated for Archbishop Sheen Dec. 9 and then to pass on the idea to others.

“We are amazed at how quickly knowledge of the program spread throughout the U.S. and abroad via word of mouth,” Washburne said.

The initial step, however, was for Mayer to sound out the folks at the foundation. Without hesitation, they approved of the proposal and volunteered to reach out to their own worldwide connections.

Among them was the Sheen Foundation’s counterpart in Perth, Australia. Now, thanks to a time zone advantage, the first of the memorial Masses will be celebrated at St. Mary’s Cathedral in Perth.

Washburne made a quick phone call to a grandson, Tom House, who teaches English in a private school in Tokyo. She explained her idea – and its potential – and urged him to have a Mass scheduled in Archbishop Sheen’s memory and ask others to do the same.

“He agreed, and he cheered me on,” she said.

The two women next phoned the 35 members of the Sheen Foundation’s advisory council. They, in turn, began calling their contacts.

One was Vivian Sherwood of Montecito, Calif., the 82-year-old retired publicist of TV comedian Milton Berle. She became a Catholic because of Archbishop Sheen.

Sherwood estimates that she lined up “about 25 clergymen” to celebrate a memorial Mass, including Austrian Cardinal Christoph Schonborn of Vienna and Trappist Abbot Thomas Keating, founder of the “centering prayer” movement.

Another advisory council member, Rosemarie Hollinger Costello of Edmond, Okla., pitched the idea to Monsignor Frank Pugliese, vicar general of the U.S. Archdiocese for the Military Services, urging him to enlist U.S. military chaplains around the world in the program. “Consider it done!” he told her.

Among others Mayer called to help set up Masses was her son, who also resides in Tokyo. He applauded the idea.

Next, she reserved the 7 a.m. Mass Dec. 9 at her parish church and called a couple of priests to spread the word: Father Brian Kolodiejchuk, a Missionaries of Charity priest who is postulator for the cause of Blessed Mother Teresa; and Monsignor John E. Kozar, national director of the pontifical missionary societies in the United States.

According to Mayer, the Sheen Foundation’s advisory council has tried to book Masses in every city and country associated with Archbishop Sheen’s life and Masses have been scheduled in 35 countries on six continents.

“We’re really proud of our own country’s participation,” she said, adding that Masses will be celebrated in all 50 states “with the biggest ceremony scheduled at St. Patrick’s Cathedral, New York City.”

Then, she said, a panel of doctors, priests and theologians will look into the authenticity of two alleged miracles attributed to the archbishop’s intercession. One verified miracle is needed for Archbishop Sheen to be beatified; a second one must be verified for him to be canonized.

Mayer noted that, throughout church history, centuries often passed before some worthy candidates were declared saints.

“We pray it doesn’t happen in this case,” she said. “La Verne and I are anxious to make a trip to Rome and, let’s face it, we’re a couple of grandmothers, so youth hardly weighs in our favor.”

More information about Archbishop Sheen’s sainthood cause is available on the foundation’s Web site, www.archbishopsheencause.org/foundation.html.