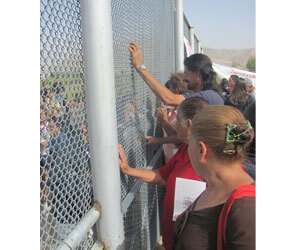 ANAPRA, Mexico – The Mexican bishop often exchanged glances with his American counterpart as they celebrated the All Souls’ Day Mass. But instead of embracing at the kiss of peace, they touched palms – though the chain-link fence.

Hundreds of Mexicans and Americans joined their bishops for the Mass, enduring dusty wind that created a brown haze. On the Mexican side of the border, on a lot surrounded by trash, wandering dogs, and food vendors, a handful of the 200 attendees paid little attention to the Mass but clung to the fence and stared longingly at the congregation on the U.S. side.

Bishop Armando X. Ochoa of El Paso, Texas, Bishop Ricardo Ramirez of Las Cruces, New Mexico, and Bishop Renato Ascencio Leon of Ciudad Juarez, Mexico, concelebrated the annual border Mass on either side of the fence. The theme for this year’s Mass was Remembering Our Dead; Celebrating Life; Working for Justice.

Betty Hernandez, 30, a mother of three and a youth minister at Corpus Christi Church in Anapra, said the Mass helps unify El Paso and Ciudad Juarez in a common cause of remembering those who have died in the drug violence as well as those who died in the nearby deserts, hoping to immigrate to the United States. Making this Mass even more poignant for Hernandez was the death of her neighbor, who was gunned down at a nearby burrito stand the previous week.

“Where there is an abundance of pain and death is God’s glory for us to hope,” she said.

As a youth minister in Anapra, which has seen more than its share of the violence, Hernandez tries to keep the teens involved in church activities, from the band and singers for Masses to ushers wearing their red smocks as a deterrent to the temptation of the easy money and violence associated with drug cartels. Many of these teens sat on the outskirts of the celebration amid the trash and wood-pallet fences that surrounded some of the nearby homes.

Behind Bishop Ascencio on the altar were seminarians from Seminario Conciliar in Ciudad Juarez. Father Hector Villa, rector, said their presence underscores much of what they are learning for their future ministries.

“This Mass is a sign of solidarity, especially for immigrants who try to cross the border and encounter so many troubles to reach their goal,” Father Villa said. “We’re asking the authorities in the U.S. to be more just with the people who want a dignified life through work, and this is also a subtle sign for Mexico that they are responsible for providing work for these people.”

Father Villa said he would like his 94 seminarians to be more exposed to real-life issues – such as violence and immigration – sooner rather than later.

“The church can definitely help more by being more organized and active in this moment where immigrants are seen as enemies,” he said. “These people give so much to the U.S. in terms of work, culture, and money.”

During the Mass, Bishop Ascencio accepted symbols of the migrants’ journey to the United States: flags from Latin American countries of origin, a portrait of Our Lady of Guadalupe, a gallon jug of water, a backpack and tennis shoes.

When the Mass was initiated in 1999 it was at the height of the infamous murders of Daughters of Juarez, female factory workers who disappeared and were later found to be sexually assaulted and murdered. Some were buried in shallow graves not far from where the Mass was celebrated. The number of these victims has been projected as high as 400.

Since 2006, Ciudad Juarez has seen about 8,500 murders as a result of a brutal drug war. And amid the death and sorrow are issues with immigration and human rights that include a redefinition of immigration from those not only seeking gainful employment in the United States, but those fleeing the violence of Ciudad Juarez. It is estimated that more than 200,000 people have fled the once vibrant city since 2006.

Before the Mass, Mexican children ran along the border fence some 50 yards behind the makeshift altar. The group quickly grew in size as a U.S. Border Patrol agent went back and forth between his unit and the fence.

Upon closer examination he was found distributing Halloween candy through the fence to the children. Asked about his covert act of generosity, he just smiled and said, “It’s no big deal.”

Marco Raposo estimated that on the U.S. side, 300 people attended the Mass, celebrated in Sunland Park, N.M., in the Las Cruces Diocese. Raposo is director of the El Paso diocesan Peace and Justice Ministry, which helped arrange the liturgy.

In his homily, Bishop Ramirez said the Massgoers had come together “once again to ask forgiveness” for crimes, sins, violence and injustice that the border fence represents. He cited examples of violence and death on the part of both Mexico and the United States.

He said the physical barrier of the fence shouldn’t stop those on both sides of the border from loving each other “as the brothers and sisters they are in the eyes of God.”

On Nov. 1, several young people marching in central Juarez to remember the 8,500 dead from the drug war violence there were arrested as they pasted paper crosses on buildings and painted crosses on an intersection in memory of those killed.

On Nov. 3, a coalition of human rights organizations on the border called a news conference to condemn the arrests and assaults on protesters.