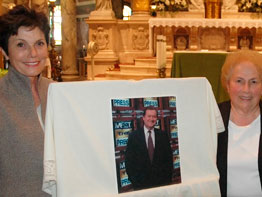 LACKAWANNA, N.Y. – Minutes before a memorial Mass for NBC News journalist Tim Russert, Mercy Sister Lucille Socciarelli smiled as she looked out at nearly 1,000 people who had come to Our Lady of Victory Basilica in Lackawanna.

“Tim would have liked this: the people, warm weather, sunshine and the Buffalo Bills are winning right now,” she said.

The Sept. 15 Mass, which was in the Buffalo Diocese, was sponsored by the Sisters of Mercy of the Americas New York, Pennsylvania, Pacific West Community, of which Buffalo is a part. Mercy sisters participated in various ways during the Mass.

“We want people to remember Tim’s legacy. I am so proud of the Sisters of Mercy for doing this,” added Sister Lucille.

Sister Lucille, a longtime friend of Mr. Russert and the seventh-grade teacher who steered him toward journalism, sat with members of his family at the Mass. Mr. Russert’s wife, Maureen Orth, and his father, best known as “Big Russ,” were at the Mass.

In a welcome before the Mass, Sister Nancy Hoff, president of the New York, Pennsylvania, Pacific West Community, called Mr. Russert a well-respected journalist who put faith and family first and thought often of the Sisters of Mercy who educated him.

“Faith shaped the way he lived his life,” she said. “What made him so special is that he was one of us; he was proud of his Buffalo roots.”

In his homily, Jesuit Father John Mattimore said Mr. Russert was a humble man who thought of others. “He was a man who knew that anything that God gave him was to be used for others,” said Father Mattimore, who was the main celebrant. Fifteen other priests concelebrated.

The priest said Mr. Russert learned from women who are called the “great name of Sister of Mercy.”

He defined “mercy” as another word for God.

“Mercy means doing good for those in need and helping all you can. … On June 13, Tim met God, who is mercy,” he said.

Hundreds of people signed memorial books at each entrance to the basilica. One of them, Tim McCarthy of Hamburg, waited patiently on the hot and humid afternoon to sign the book.

“(Mr. Russert) was an icon,” he said. “He meant so much to Buffalo and the world. He was a man of family and faith.”

After signing a memorial book Mary Alice Walz said she grew up three blocks from Mr. Russert in South Buffalo.

“He did so much for the Sisters of Mercy,” she said.

After Communion, Mercy sisters sang the “Suscipe,” a prayer of their foundress, Mother Catherine McAuley.

Sister Lucille said that the Mass was a wonderful way to remember Mr. Russert’s life. And as for Mr. Russert’s beloved Buffalo Bills of the National Football League, they came from behind Sept. 14 to beat the Jacksonville (Fla.) Jaguars, 20-16, giving the Bills their best start in five years.