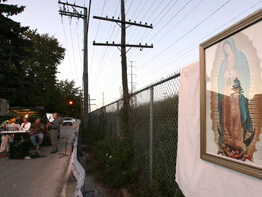 CHICAGO – Violence can happen anywhere. But when Israel Morales, a neighborhood organizer and parishioner at St. Nicholas of Tolentine Parish on Chicago’s Southwest Side, was gunned down this summer near the church, community members decided they had to do something.
The first thing they did was have a Mass outside, near where Morales was killed. Since then, the parish has had three more street Masses, with another set for Sept. 27, all on blocks where violence has occurred.
The first Masses drew 120 to 150 people; one in late August had more than 200 in the congregation.
“There’s something in the ancient ritual of reconsecrating ground that has been violated in some way,” Father Stan Rataj, the pastor, told The Catholic New World, Chicago’s archdiocesan newspaper. “I think it makes a statement to the people.”
Father Rataj and the associate pastor, Father Roger Diaz, take turns as the main celebrant of the bilingual Masses, although both are at all of them.
“We saw how the people came out and participated,” said Maggie Perales, a parishioner and organizer with the Southwest Organizing Project. “Because of the work that I do, I talk to a lot of people. It’s hard to get people to surface. They live in fear. I feel like families are isolated and don’t know where to go.”
They might not want to speak out because the ones causing trouble are their neighbors’ children, or because they don’t want troublemakers to take revenge, she said. But they will come to Mass.
“The Mass itself is sacred,” she said. “They feel comfortable coming out for that.”
Worshippers pray for the victims of violence and their families, but also for those who engage in violence, she said.
“It’s not against someone,” agreed Edith Robles, the parish’s director of religious education. “It’s against violence.”
The Masses help show the community that the church is there for them, she said. “We know there are Catholics who won’t come to us every Sunday,” she said. “But we’ll come to them.”
The Masses have even attracted non-Catholics, who asked if they could stay and pray with parishioners, Father Rataj said.
“It’s one small way we can say this (violence) is not acceptable,” he said.
Robles sees the effect within the parish.
“I see it really strengthened our community to find courage through the Gospel, to seek peace, to stand against violence,” she said.