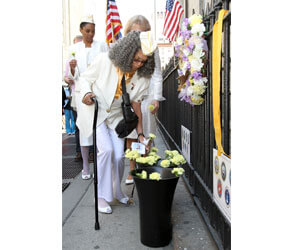 The celebrant was Father Donald Fussner, whose brother, William, was a member of the U.S. Army Air Corps killed in a bombing raid over Germany during the Second World War. Reflecting on the Gospel story of the disciples traveling with Jesus on the road to Emmaus after the resurrection, Father Fussner said, “True discipleship is service, meeting the needs of others. Today we honor mothers who give in a special way, by giving their sons and daughters in the service of our country. A true disciple is one who gives.”

The May 8 noon Mass started as “a prayer from the heart,” said Kathryn Cross, the Gold Star mother who organized the event. Her son, Navy SEAL Tyler Connely, died while serving in Iceland in 2002.

St. Peter’s, the oldest Catholic parish in New York state, serves a mostly weekday congregation, Father Fussner said. About 50 people generally attend the midday Mass on Sunday. At the Mass honoring the “mothers of the fallen,” there were more than 250 people.

Bagpipers from the ceremonial unit of the Fire Department of New York welcomed worshippers and the procession into the church included a color guard from the Navy Junior Reserve Officer Training Corps of the High School of Graphic Communication Arts in New York. The first reading was offered by Army retired Lt. Col. Dwight Webster, whose son is serving in Afghanistan. The responsorial psalm was read by Gold Star mother Emily Toro, whose son, Army Pvt. Isaac Cortes, was killed in Iraq in 2007.

After the homily, Father Fussner introduced speakers who he said represented “the mosaic of the military and veterans community,” spanning faiths, military branches and various armed conflicts.

Navy retired Lt. Cmdr. Evan Dash quoted a Jewish proverb, “A mother understands what a child does not say.” Brian Hegg read the prepared remarks of Army Sgt. Marco Hassan, a Muslim who was unable to attend the service. He recalled that Mustafa Kemal Ataturk, founder and first president of Turkey, honored mothers at the dedication of a cemetery for those killed in the 1915 Battle of Gallipoli. Ataturk said, “You, the mothers, who sent their sons from faraway countries, wipe away your tears; your sons are now lying in our bosom and are in peace. After having lost their lives on this land they have become our sons as well.”

Army Command Sgt. Maj. Sylvia Laughlin, a Baptist minister, said, “We serve because we love our nation, we love our country and we love our sons and daughters. We know that freedom is not free and someone has to pay the price.”

After the Mass, participants reconvened outside at a cross made of steel recovered from the World Trade Center site. There, they laid wreaths and yellow carnations and recited the Pledge of Allegiance.

Representatives from the Catholic War Veterans and the United War Veterans Council told CNS that the Mass was the first religious service held on Mother’s Day to honor Gold Star mothers.

Toro said it was important to be at the Mass with six other women whose sons died in service overseas or on Sept. 11. She said she volunteers as a Patriot Guard Rider, supporting families of fallen soldiers at wakes and funerals.

The American Gold Star Mothers organization was formed in 1928 by women whose sons died in the First World War. Then, as now, members volunteered at veterans’ hospitals as a way to comfort one another and channel their gifts to lessening the pain of others, according to their website.

The name refers to the gold star that traditionally hung in the window of the home of a deceased serviceman. The gold star replaced a blue star, which is displayed to indicate someone on active duty. More recently, silver stars are also used to honor the wounded.

Gold Star mothers wear white outfits reminiscent of nurses, but tailored to individual tastes. Cross, whose jacket was trimmed in a ruffled peplum, said wearing white was suggested by President Woodrow Wilson, who was concerned that the prevalence of women in black mourning clothes would have a negative effect on public morale during World War I. “White shows our strength and our hope for peace,” she said.

Encouraged by the turnout, Cross said she hopes the Mother’s Day Mass for Gold Star mothers will become an annual event.