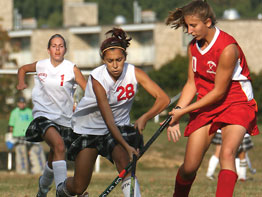 Now, returning only two seniors has put pressure on the Magic’s squad and coach as the team, now 6-6-2 as of Oct. 21, focuses on team unity as they prepare for post-season play.

The returning two seniors, Danielle Maskeroni and wing Sasha Slacum, are carrying a lot of the weight on their shoulders but stepping up beautifully, according to head coach Alexandra “Alex” Chambers. “It’s been a challenge, but our two seniors are working hard to pull it all together.”

Maskeroni, a seasoned veteran, not only shows her leadership skills on the field but off of the field as well. One example of such leadership is Maskeroni’s pattern of preparing a quote that she hands out to each player before every game. “The team takes the quote and that’s what we reflect on,” said Chambers.

On the field, Maskeroni is going above and beyond the call of duty, playing injured with diagnosed shin splints. “She just plays through it,” said Chambers. “We had to slide her back to centerback from midfield and she is doing very well.”

Maskeroni’s co-captain, junior goalie Rebecca Tracey, is quiet, but the team listens when she does speak. “Rebecca is tremendous at keeping the morale up on this team,” said Chambers.

After a surprise 3-2 loss to The Catholic High School of Baltimore last week, it was Tracey who approached Chambers for a commitment to have an intense practice the following day. “She always wants to know how she can improve and continues to work hard,” Chambers said.

On offense, it’s sophomore Jenna Parr leading the scoring parade for the Magic. With Parr knocking in the goals, Chambers has been most impressed with the team’s junior midfielders, Jillian Terry and Kara Solesky.

“Our conference is so balanced that on any given day it can be anyone’s game,” said Chambers, who is in her second year as head coach. Chambers, a full-time student at University of Maryland, Baltimore County, said, “I love the opportunity to coach at Mercy.”