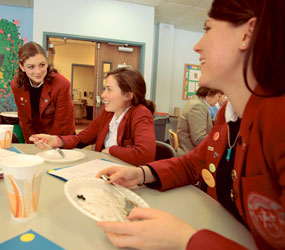 Late on Feb. 2, juniors Michelle Rodriguez and Emma Baird were putting the finishing touches on preparations for Justice Advocacy Day at Maryvale Preparatory School in Brooklandville.

While students across Baltimore County might have been crossing their fingers and hoping that snow was going to cancel classes, Michelle and Emma were praying months of planning would not go to waste, and their day of justice education would take flight.

A two-hour delay could not stop the Feb. 3 success story of Justice Advocacy Day. The project brought in some of the region’s most noted advocates to address students, while allowing some 40 students to educate their peers on global and local issues.

“It’s been really crazy, but it’s good,” junior Emma Baird said. “It’s all worth it.”

The day focused on poverty and hunger, as well as the effects of war. Bill McCarthy, executive director of Catholic Charities, spoke to students about being called to serve.

“I think it’s amazing the school is promoting social awareness all in one day and everyone’s in one place,” said McCarthy, whose daughter attended the school.

Ted Miles, Catholic Relief Services’ relationship manager for religious education, delivered the keynote address. Students heard from a wrongfully imprisoned and now free man, a Sister of St. Joseph who worked with prisoners, an immigrant family and a man who owns a farm that dedicates crops and vegetables for Maryland food pantries.

The idea for Justice Advocacy Day has its roots in Micah 6:8, a social justice weekend at the Monsignor O’Dwyer Retreat House in Sparks. Six Maryvale students – Michelle, Emma and seniors Kelly Kane, Shannon Murphy, Natalie Edmonds and Natalia Ridgely – attended and were asked to develop project ideas for their school or parish.

“They more than delivered on everything,” Sister Shawn Marie said. “We gave them some help, but it’s been all about what they did. It’s really wonderful.”

Michelle remembered looking at administration members with shock when they said an entire day could be dedicated to their project.

“You’re going to give us a day? That’s incredible,” Michelle remembered saying. “We were so excited.”

Detailed presentations on justice were painstakingly researched by the six Micah 6:8 students and shared with student teachers.

“We taught them the lessons and had meetings and stayed after school until 7 p.m. on more than one occasion,” Michelle said. “They (student teachers) also did a lot of their work on their own, and we’re incredibly thankful to them.”

Students were provided a free lunch of rice, beans and water by Sage Dining Services. Organizers polled students to find out how interested they were in helping others.

“What we found out is that almost every single girl in our school cares about social justice,” Michelle said. “They want to do something to help, but they don’t know how to get involved. We want to concentrate on local places so they can have the opportunity to help.”