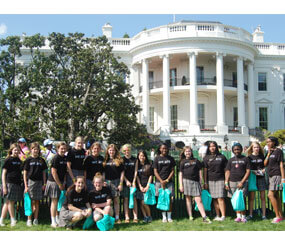 Morgan Ferrans lives on a Phoenix farm and she often draws her horses. But art isn’t something she thinks about as a potential career.

“It’s just kind of a side thing,” said the Maryvale Preparatory School seventh-grader.

Michelle Obama might tell Morgan to think twice, however. The First Lady chose her submission as the Official Easter Egg Roll Program Cover. Morgan’s colorful and imaginative depiction of children playing sports with the Easter Bunny caught the attention of Obama.

“When it was announced,” Morgan said, “I was shocked.”

Students from 135 Mid-Atlantic region schools submitted artwork for the Easter Egg Roll Poster and Program Cover contest. A Virginia girl’s art was chosen as the poster.

Both winners incorporated the theme of “Get Up and Go!” which goes along the First Lady’s Let’s Move initiative, which aims to combat childhood obesity and promote health and wellness, according to the White House.

Morgan, along with her Maryvale art classmates, visited the White House in Washington for the annual Easter Egg Roll April 25. Morgan, a parishioner of Immaculate Conception in Towson, was elated to view the program in the hands of the thousands of attendees at the White House.

“I just wanted to tell everybody that that was my picture on the front,” she said.

Morgan took part in the traditional egg roll with her friends, met a Washington Redskins player and witnessed performances by music stars like Colbie Caillat and Willow Smith. She also stood a few feet from the President Barack Obama and the First Lady.

She received a letter from the White House and a wooden Easter egg with a White House print on it. When she returned to Maryvale April 26, she was recognized during a school-wide morning gathering. Her art work hung in the lunchroom.

“It was really exciting,” Morgan said. “Throughout the whole day, girls were coming up to see me and saying ‘Good job’ and ‘congratulations.’”

Morgan still doesn’t know if all this encouragement will lead to a career in the arts.

“I think I definitely want to do it for fun,” she said. “It’ll always be a hobby.”