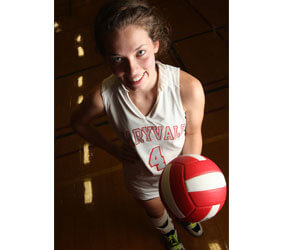 Whether it’s on a volleyball court, an orphanage in Jamaica, or as co-president of a social justice movement among local Catholic high schools, Kate Browne leads.

Browne is a senior at Maryvale Prep, where she plays libero, defensive specialist, for a team that figures to earn a berth in the Interscholastic Athletic Association of Maryland B Conference playoffs.

“I like to call Kate the mother of the team,” said Emily Johnson, the Lions’ second-year coach. “She made my first year easier. If we need to raise funds or get athletic gear, she’s the one who organizes. When we wanted to order new warm-ups, Kate designed and ordered them.”

Browne would like to attend an Atlantic Coast Conference institution such as Maryland, North Carolina, Virginia or Boston College, where the student body includes her brother, Brian. Spare time in college, however, will be spent not on volleyball, but social justice.

The president of the Maryvale Prep chapter of the National Honor Society, Browne caught the activism bug during the 2009-10 school year, in the Theology class taught by Michael Vogrin. She was one of 12 Maryvale Prep juniors who spent spring break in Montego Bay, Jamaica, where they helped at an orphanage.

“It cares for disabled children who were abandoned,” Browne said. “One 14-year-old girl, Moya, couldn’t read, write or speak, but every morning she would drag herself to the washroom and bathe herself. The spirit we witnessed was moving. I think that trip changed my life.”

A parishioner of Sacred Heart in Glyndon, Browne has been doing what needs to be done since at least the seventh grade, when she helped her sister Colleen’s Girl Scout troop, in its effort to provide tutoring at an elementary school in Baltimore City.

She is co-president of CAST, Catholic Schools Together. The fledgling organization brings together students from Maryvale, Calvert Hall, Loyola Blakefield and Notre Dame Prep.

This school year, they will raise awareness of the effect of homelessness on children. Last school year, they aided Cristo Rey Jesuit High School in Fells Point, where Browne tutored at-risk students in math, science and English.

“I got to see not only the struggles some of them have on the academic level,” Browne said, “but to understand their home life, how hard it can be just to get to school. The whole point of that outreach, we’re not just supporting Cristo Rey, they are a part of us, a Catholic school with a lot to give.”