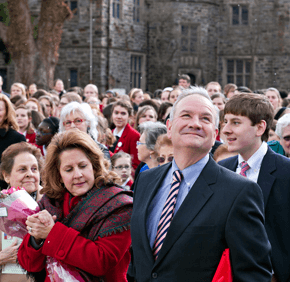 By Elizabeth Skalski
eskalski@catholicreview.org
William McCarthy Jr. said eight inches of snow fell in Baltimore on the night of his daughter’s wake, so it’s no surprise to him that – nearly five years to the day – snow flurries fell as a building was dedicated in his daughter’s name.
On March 5, Maryvale Preparatory School in Brooklandville celebrated the opening of the Erinn McCarthy Humanities Hall – a $7 million, 28,300 square-feet building with a 500-seat auditorium, lobby and gallery space, classrooms, music and practice rooms and a computer lab.
“Wouldn’t Erinn be laughing now if I was out here in a blizzard talking to no one,” said McCarthy, executive director of Catholic Charities and co-chairman of the school’s $12 million capital campaign. “Her inspiration will make a difference to those girls who followed her at Maryvale.”
The ‘In Her Name’ campaign, inspired by Erinn, also includes a 400-meter track and artificial turf field, three practice fields, the reconfiguration of the school’s entrance and a storm water management system.
Erinn Kathleen McCarthy, a member of Maryvale’s class of 2010, died in 2007 from a rare form of bone cancer.
In May 2010, it was announced that the building would be named in Erinn’s honor and construction began that December.
The building’s opening comes one week shy of the five-year anniversary of Erinn’s death, said Bill McCarthy, who added that it’s by coincidence that the building reflects everything Erinn loved – the arts, English and history.
“This project is an act of love,” McCarthy said.
Maria McCarthy, Erinn’s mother, said while “I don’t know that she envisioned this space or the track, she thought Maryvale needed the help and was a special place to her.”
The McCarthys also have a son, Ryan, a junior at Loyola Blakefield.
Bishop W. Francis Malooly, of the Diocese of Wilmington and formerly of the Archdiocese of Baltimore, led a liturgy before the ribbon cutting.
“There isn’t any reason today why we shouldn’t be smiling,” Bishop Malooly said.
Sister of Notre Dame de Namur Shawn Marie Maguire, Maryvale’s president and headmistress, said she believes the snow flurries during the dedication was Erinn’s doing.
“She never felt sorry for herself – she wanted to make the best of every single day,” Sister Shawn said. “(Today is) overwhelming in many ways. It’s the culmination of people’s work and dreams and the inspiration of a little girl.”
Maryvale sixth-grader Mary Grace Marts, a parishioner of Holy Trinity, Glen Burnie, said the new building is “extremely special,” even to students who didn’t know Erinn.
“She wanted us to have a building and said before she died that we needed more space,” said Mary Grace, 11. “It has her name written all over it. I’m very excited to come into Maryvale and be a part of it.”
Carly Ross, a Maryvale senior and student council president, said the opening of the new building is “a new beginning and a fresh start for Maryvale.”
“It brings our small community together even more,” said Ross, 18, a parishioner of a parish in Pennsylvania.

Click arrows to explore photo gallery. View full screen by clicking the button at the bottom-right of the slideshow.