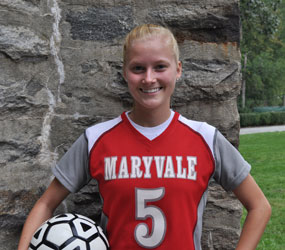 Whether she’s running up and down a soccer field in the fall, or darting around a lacrosse field in the spring, Carly Ross calls the playing field her second home.

The Maryvale Preparatory School senior has been a two-sport varsity threat since her freshman year. She stands 5-feet-3 inches tall; what Ross might lack in size, she compensates for with her speed and outstanding teamwork, crucial elements in both soccer and lacrosse.

“I’m really into team sports,” Ross said. “Being able to get help from other teammates and helping them out is really important to me. I get underestimated a lot because of my size, but I still manage.”

Her achievements managed to grab the eye of college recruiters, as Ross has verbally committed to playing lacrosse for the University of Florida. In just their second season, the Gators reached the quarterfinal of the 2011 NCAA tournament.

Playing lacrosse at the next level is something Ross said she’s looking forward to.

“My older brother played lacrosse in college,” Ross said. “Watching him go through the process and going to his games made me want that same atmosphere and same college experience.”

Colin Devlin, Ross’s soccer coach at Maryvale, has a good idea what type of player Florida will be getting.

“She is a very, very good athlete,” Devlin said. “It’s easy for a coach to put an athlete like that on the field in any sport. She’s fast, and a good-thinking player – she can think quickly during play and then act on it, and her speed is key to that.”

Soccer has benefited from her selflessness, as she is always willing to fill in wherever she is needed.

“She has no problem saying ‘I’ll play wherever you want me to play’ and that’s all a coach needs to hear,” Devlin said. “Not every kid has the ability to do that.”

Devlin said that Maryvale will also miss her leadership skills, noting how other players rally around the varsity captain. Ross, interestingly enough, credits her off-field activities as the source of her maturation into a leader.

A parishioner of St. John the Baptist in New Freedom, Pa., Ross is the president of the student council and a member of PACT (Promoting Active Community Testimony), a group run by four area Catholic schools.

As student council president, Ross leads the school’s weekly gatherings and spearheads school-wide events and activities, such as homecoming, that are geared to bring the students together as one community.

“Being president of the student council gave me a head start on being a leader,” Ross said. “I really like being in a group and being able to help people and lead people.”

In addition to her sports and other extracurricular activities, Ross has managed to carry a 3.73 grade point average while taking a number of advanced placement and honors courses.

A lover of science, Ross said she enjoys her physics and biology classes the most. She plans on parlaying that love into her career path, as she intends to pursue a major in either biomedicine or bioengineering once she gets to Gainesville, Fla.