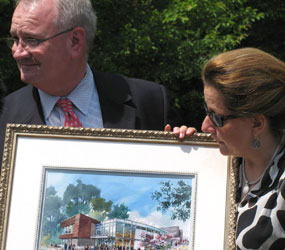 As a warm, spring sun shined upon their faces May 14, Bill and Maria McCarthy wondered why they were being summoned by Sister of Notre Dame de Namur Shawn Marie McGuire, the headmistress of Maryvale Preparatory School in Brooklandville.

Bill McCarthy, executive director of Catholic Charities and co-chairman of the school’s $12 million capital campaign, had just addressed students and supporters. Outside of wielding a shovel at the groundbreaking, he and his wife thought their day was done.

Sister Shawn Marie, however, had a surprise: the Humanities Building that they were about to ceremoniously begin work on was to be named in honor of their late daughter, Erinn Kathleen. The McCarthys were presented an artist’s rendering of the center, with Erinn’s name inscribed on it.

Erinn died three years ago from a rare form of bone cancer. She was in the Maryvale Class of 2010, which will graduate next month. Her classmates, who were inducted into the alumnae association earlier in the day, formed a ring around nearby chairs.

“I think the class of 2010 has always been 77 young women and an angel since she passed,” Bill McCarthy said. “She was always part of this class.”

Tears began to stream down the couple’s faces as they were handed the rendering.

“I couldn’t believe it,” Maria McCarthy said. “I wasn’t really sure it was happening.”

Maryvale is raising money for the “In Her Name Campaign,” which is inspired by Erinn.

The humanities center will be 30,000-square-feet and feature a state-of-the-art auditorium, lobby and gallery space. It will include classrooms, music and practice rooms, and a technology resource center.

As she prepares to graduate, senior Caitlin Trainor said that the groundbreaking ceremony is reminder that she is committed to Maryvale for life.

“It’s a great sign of the transition we’re making,” Trainor said. “Coming back, I’m excited to see how the school is going to change. As an alumna, I’ll want to get the word out.”

Sister Shawn Marie said the day was filled with emotion. The new additions, she said, will be landmark for Maryvale.

“It’s transformational,” she said. “It’ll set this school for years to come. When we have this, we will be truly be set.”

Maria McCarthy said her daughter loved Maryvale and that when she died, the school was supportive in ways that could not quantified.

“It’s a special bond,” she said. “When she passed away, we didn’t just leave. Sister (Shawn Marie) said, ‘You’re not going anywhere. You’re going to part of the community.’ ”