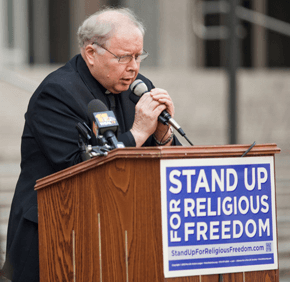 Lynn Watts, 48, attended to give a message to President Barack Obama.

“The mandate that Obama put out overstepped his boundaries and infringed on our religious freedoms, said Watts, a parishioner of Our Lady of the Fields in Millersville. “We need to stand up and let him know that we don’t all agree with it.”

The Baltimore gathering was one of 140 held simultaneously across the nation to protest “assaults” on religious liberty, particularly the recent U.S. Department of Health and Human Services mandate requiring employers, including religious institutions such as hospitals, universities and charities, to provide coverage of contraception, abortifacients and sterilization in their health insurance plans.

The use of contraceptives, abortifacients and sterilization violate the teachings of the Catholic Church and the consciences of the Catholics who would be forced to pay for their availability, according to U.S. bishops.

Chicago-based Pro-Life Action League and Michigan-based Citizens for a Pro-Life Society organized the nationwide rally, whose theme is “Stand Up for Religious Freedom – Stop the HHS Mandate!” According to its website, the rally aimed to be “a peaceful, family-friendly, non-partisan, ecumenical event.”

Former Ambassador Alan Keyes gave the keynote address in Baltimore, speaking of current efforts to protect religious liberty as a “battle.” Standing under the rally’s banner, Keyes spoke with gusto.

Congressman Andy Harris, a Maryland Republican from District 1 and a Catholic, said Marylanders have a special responsibility to stand up for religious freedom, given their history.

The rally could make a difference, he said.

“You’re holding the same kind of rally at 140 locations across the country, I think you’re sending a clear message to Washington that you can’t trample on religious freedom,” he said.

Speakers said the HHS mandate was only one example of many infringements on religious liberty, and they feared the mandate is only part of a “slippery slope.” Their central message was that action is needed now.

The U.S. bishops have been outspoken about their concern that religious freedom protections are eroding in America. The U.S. Conference of Catholic Bishops formed the Ad Hoc Committee for Religious Liberty in September 2011 to address “an increasing number of federal government programs or policies that would infringe upon the right of conscience of people of faith or otherwise harm the foundational principle of religious liberty,” according to a letter from the conference’s president, Cardinal Timothy M. Dolan.

Archbishop William E. Lori, who is to succeed Cardinal Edwin O’Brien as the next archbishop of Baltimore, chairs the committee and has been a vocal leader before the Administration and Congress.

The bishops stepped up their efforts in the wake of the January U.S. Health and Human Services announcement that many Catholic institutions would not be exempted from providing insurance coverage of drugs and procedures that violate church teaching.

On March 14, the bishops released a statement titled “United for Religious Freedom,” which reiterated their positions and urged Catholics to pray for the preservation of religious liberty.

“Prayer for Religious Liberty” cards and other resources can be downloaded as a PDF file at the USCCB’s website, usccb.org/conscience.

Watch a slideshow of the event: