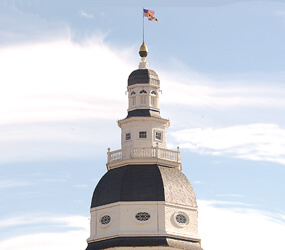 Concerned about threats to religious freedom in Maryland and beyond, the state’s Catholic bishops released a Nov. 9 statement challenging all Marylanders to “reaffirm the basic, foundational principles upon which our democratic society is built.”

“Everyone has the right to freedom of thought, conscience and religious belief,” the bishops said in a 12-page statement titled ‘The Most Sacred of All Property: Religious Freedom and the People of Maryland.’ “No one should be subject to coercion because of those beliefs.”

“We know that religious liberty is a foundational element of a vibrant democracy,” they said, “and helps guarantee those other precious freedoms we Americans enjoy. The only way to preserve it is through the vigilance of concerned citizens and their willingness to stand up for this right.”

The statement outlines the state’s long history of religious toleration and how that toleration was challenged when people did not defend it. It also points out recent attacks on religious freedom such as a Baltimore City ordinance that required pro-life pregnancy centers to post signs with language mandated by the government – a law that a federal judge declared unconstitutional.

Other areas of concern highlighted in the document include the passage of laws in Washington, D.C., and Boston that led Catholic Charities to close their adoption services after same-sex marriage laws in those jurisdictions would not allow them to place children exclusively in homes with a mother and a father.

The bishops assert that religious freedom is not merely a civil right afforded by the government, but “a natural right due each person because of his or her human dignity.”

Religious freedom protects the ability to practice any faith or no faith, the bishops said, and it defends a person’s right to convert from one faith to another.

“It preserves the right to follow one’s conscience, in acts both internal and external, in private and in public, as an individual and as a member of a community,” the bishops said.

“We are seeing the erosion of protections in law that have been in place for decades,” Russell said. “The media tends to paint the church’s resistance to these efforts as our imposing our religious beliefs on others.

“Quite the reverse is going on. We are suddenly having to use every measure possible to resist losing freedoms that have long been regarded as necessary to our country’s most fundamental principles.”

Recent cases of concern to the bishops include the U.S. Department of Health and Human Services efforts to enact a mandate for all private health insurance plans to cover surgical sterilization procedures and birth control without real exemptions for religious institutions.

David Kinkopf, an attorney who represents the Archdiocese of Baltimore and who served on an eight-member religious liberty task force that advised the bishops on the document, said America’s founders recognized that society is strong when freedom of religion is promoted and when rights of conscience are protected.

Conflict between the state and the protection of conscience is not unique to modern times, he said.

“As the volume of laws and the volume of governmental regulation increases,” he said, “we are going to continue to see these kinds of conflicts in society. I think that’s why the bishops’ document is so important.”

All parishes in the state will receive copies of the statement and a shortened version of the document will be published in bulletins. Copies will also be provided to the state’s elected officials.

Russell encouraged Catholics to educate themselves on legislative issues at events such as a Nov. 5 “advocacy day” in Annapolis that attracted 100 participants.

“I hope the document will wake people up to the importance of our country’s first freedom,” Russell said, “and inspire them to be more courageous and willing to share the public teaching of their faith in every avenue of their lives.”

Visit catholicreview.org/pdfs/religiousliberty.pdf for the bishops’ statement in its entirety.