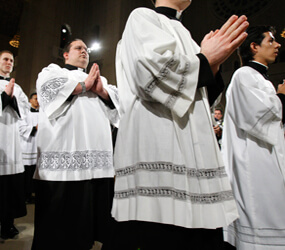 VATICAN CITY – The question of priestly celibacy is one that keeps bubbling to the surface at the Vatican, most often in the theoretical discussions of synods of bishops but more concretely in a new papal document on Anglicans coming into the Catholic Church.

The fact that married former Anglican priests may be ordained as Catholic priests under the new arrangement – albeit on a case-by-case basis – has given rise to widespread speculation that this represents a step toward jettisoning the general rule of celibacy.

“Hope for priests who would marry” was a typical headline in the days that followed the Vatican’s announcement of the Anglican plan.

But as on many previous occasions, the Vatican moved quickly to dispel that notion.

“The possibility envisioned by the apostolic constitution for some married clergy … does not signify any change in the church’s discipline of clerical celibacy. According to the Second Vatican Council, priestly celibacy is a sign and a stimulus for pastoral charity and radiantly proclaims the reign of God,” the Vatican said in a statement Nov. 9 accompanying the papal document on the Anglicans.

Indeed, it seems that every time the celibacy issue is pushed, there’s a swift pullback to defend the current rule.

The day before details of the Anglican plan were made public, Pope Benedict XVI went out of his way to underline the importance of priestly celibacy during a visit to the northern Italian city of Brescia. Citing Pope Paul VI, he said celibacy was the way a priest “configures himself most perfectly to Christ,” manifesting and reflecting Christ’s own love for his church.

A few days earlier, the Vatican newspaper ran a long article by Italian Cardinal Dionigi Tettamanzi of Milan, who defended priestly celibacy as a choice that can attract and inspire people, without “impoverishing and even less suffocating the values of sexuality.”

Cardinal Tettamanzi’s predecessor, Cardinal Carlo Maria Martini, is among those who have suggested the church find ways to “adapt” its celibacy rule in different situations. Some have said that, specifically where the priest shortage is greatest, exceptions might be made to ordain married men of “proven virtue.”

The issue has been raised in several synods of bishops, including one on priestly formation in 1990, where the reaction was typical: after a minority of bishops asked that qualified married men be ordained, the synod as a whole ended by voicing strong support for mandatory celibacy. Pope John Paul II quickly accepted the synod’s action and branded calls for ordaining married men as “systematic propaganda hostile to priestly celibacy.”

In 1993, a few weeks after bishops in western and northern Canada asked the Vatican to consider allowing married priests in sparsely populated areas, Pope John Paul told Canadian bishops that dropping the celibacy rule was “not the path to follow” in addressing a shortage of priests.

A similar pattern of events occurred during the 2005 synod on the Eucharist. Several Latin-rite bishops, citing the scarcity of priests in their regions, suggested ordaining married men. But the synod’s final propositions rejected that idea, and Pope Benedict closed the synod by praising celibacy as a “precious gift” for the whole church.

In 2006, Brazilian Cardinal Claudio Hummes found out how sensitive the question of celibacy is at the Vatican. Just before taking over the reins of the Vatican’s Congregation for Clergy, he said in an interview in Brazil that although priestly celibacy is part of Catholic history, it was not a dogma and was subject to review.

Within a few hours after arriving at the Vatican two days later, the cardinal issued a clarification, saying the subject of celibacy was not up for discussion.

The church already has married priests, of course, mainly in its Eastern rites, which – unlike the Western church – never prohibited a married clergy. But the Latin-rite church, today the home of more than 95 percent of Catholics worldwide, began putting restrictions on the married priesthood after the fourth century, and in the 12th century made celibacy a condition for ordination.

The modern priest shortage is often cited by proponents of change. Worldwide, the number of Catholics served by each priest has risen about 20 percent over the last 20 years. The situation is especially serious in some Latin American countries like Brazil, where today there are more than 8,000 Catholics for each priest.

Vatican officials have answered that the correct response to this challenge is essentially twofold: better distribution of existing priests, and better promotion of vocations. Pope Benedict has emphasized quality over quantity when it comes to priestly ministry.

The question came to a head in 2006, when Zambian Archbishop Emmanuel Milingo was excommunicated after he ordained four married men as bishops without papal permission. Archbishop Milingo called for immediate steps to accept married priests in the Catholic Church.

In response, the pope convened more than 20 heads of Vatican agencies for a one-day meeting to review the church’s policies. The outcome: a statement strongly reaffirming the value of priestly celibacy and a call to highlight its importance among priests and seminarians.