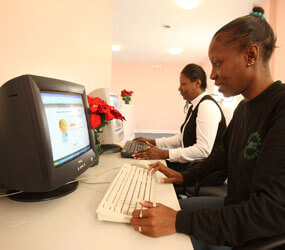 At 15, Cynthia was doing drugs and looking to escape her Baltimore City home. She said her mother was physically abusive, and that many of her own romantic relationships involved mental abuse.

She spent 30 years ensnared by addictions.

Now, thanks to Baltimore’s Marian House, Cynthia barely recognizes the person she sees in the mirror. Tears came easily as she recalled her story of pain and success.

“I’ve grown to like myself again,” said Cynthia, whose last name is being withheld for privacy concerns. “I don’t really allow people or things to put me down. I have that sense of pride again.”

Marian House is a healing community for women and their families in need of housing and support services. Co-founded by the School Sisters of Notre Dame and the Religious Sisters of Mercy 27 years ago, Marian House, on Gorsuch Avenue, provides a safe environment for women.

Executive Director Katie Allston, a parishioner of St. Augustine in Elkridge, said Marian House is run like most non-profit organizations, with government and private foundation grants.

Allston, 35, is the first non-religious to lead Marian House. The current staff includes Sisters of Mercy, School Sisters of Notre Dame and Mission Helpers of the Sacred Heart.

“I think when you work with sisters, it’s not just a job to them,” Allston said. “They’re very giving and very loving, and that’s infectious.”

Allston said Marian House is a work program for women typically from 28-day drug rehabilitation programs or prisons. Typically, their incarceration is drug-related.

“So they’re one-month clean from sometimes a 20, 30-year addiction history of using crack, heroin or whatever it may be,” she said. “They’re still pretty fragile.”

Some were previously living in abandoned buildings or prostituting themselves to satiate addictions.

While in Marian House programs, the women have to maintain their sobriety, thanks to on-site addiction education and intensive, outpatient drug treatment.

Each woman must receive on-site therapy.

“Our goal is to have them completely turned around and be citizens like you and me, paying taxes and being good neighbors,” Allston said. “There is always a reason that the woman has started using drugs in the first place. Often, it’s some sort of horrible childhood experience, whether it’s abuse, neglect, sexual abuse – horrible stories.”

Marian House helped Cynthia learn that she suffers from some mental health issues and is a diabetic.

“If Marian House doesn’t have it on site, trust and believe me, they have the resources that you will get it immediately,” Cynthia said.

Those accepted into the 24-hour-a-day program receive in-house training, often in being a receptionist. They answer phones and doors, while setting up meetings.

An employment counselor works with everyone in the program to find jobs. Employment, ultimately, means graduation from the program. Currently, Marian House is looking for more employers who might need a receptionist, cleaning person or someone to fill other positions.

Some participants live at the Serenity Place apartment building, in the old St. Bernard School, across the street from Marian House. The complex, renovated in 2007, has 19 separate apartments. Others live in row homes or former convents.

Allston said Marian House partially subsidizes the rent of participants, who contribute 30 percent of their income.

Some women have moved out of the program to purchase their own homes, through the Chesapeake Habitat for Humanity program.

“That, to me, shows that Marian House is changing the way these women think,” Allston said.

The women are appreciative.