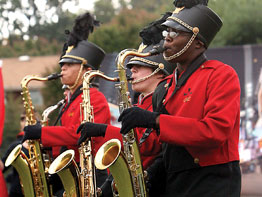 This year, Baltimoreans can enjoy the New York City skyline, jazz music at a Harlem nightclub and Times Square congestion all without leaving the city.

On Nov. 17, the nearly 80 members of the Towson school’s band will expertly march in intricate formations around 10-by-16-foot postcards of New York scenes during U.S. Scholastic Band Association championships at M&T Bank Stadium in Baltimore; and it takes a lot of hard work to get to that point.

“We take it very seriously. It’s not something we take half-heartedly,” said Brian Ecton, director of bands at Calvert Hall.

‘If it was easy…’
The marching band season truly begins in August with a two-week band camp that runs from 9 a.m. to 6 p.m. The students learn the drill – where they are supposed to be on the field at each point in the show.

During the school year, the students practice two days a week after school from 3-6:30 p.m., and they gather in smaller groups to practice in the band room at least once during the school week. On weekends, they often perform at halftime during home football games, and they have competitions on Saturdays.

From the beginning of the season, the band faces some adversity.

“If it was easy, everybody would be doing it,” said Mr. Ecton.

According to the band director, the biggest challenge for the band is that some freshmen come in with little or no musical experience. Since Calvert Hall takes students from many schools, the band director can’t specify music curriculum to be covered in each school. Despite this, cuts are only made in the drum line due to the number of students who want to play in that section.

“It makes us work harder,” said Mr. Ecton, and that is exactly what the band does. In fact, one student was physically upset at the beginning of the season because he couldn’t play anything. Now, he is one of the best marchers in the band.

“Everything changes after first performance,” said Mr. Ecton. “It just opens up for them.”

‘The best around’
In addition to Mr. Ecton, assistant director David Culotta, and associate director Nicholas Marini, students also help lead the band, especially new musicians and rookie band members. The two drum majors, who try out for their positions, conduct the band on the field. The students also elect a president, a vice president and a secretary.

These students help set the bar high, according to Mr. Ecton.

“(People) don’t understand how much work it is,” said band president Eric Bartgis.
The 18-year-old parishioner of Immaculate Conception in Towson said the best part of marching band is “Saturday night under the lights.”

The senior soloist, who has been playing trumpet since fifth grade, said he knows that hundreds of people are there specifically to see the bands at Saturday competitions, unlike a football game where most people are there to see football.

The band gets a lot of support from Calvert Hall faculty and students.

“I think our band is extraordinary – certainly the best around,” said Brother Benedict Oliver, F.S.C., president of the school. “I think the attraction is the quality of the band and people wanting to be part of that.”

Brother Benedict, who along with other faculty members watched the band perform in the Bands of America Championship at Towson University Oct. 20, described the band as a great team – a team which includes students, instructors – whom he described as fine musicians and good teachers, and parents.

“And we could not do without the dedication of the parents,” he added.

In addition to what they spend on tuition, band parents give time and money to provide the band with whatever they need, explained Brother Benedict. The school president said he has been in Catholic schools all his life, and he has yet to see a group of parents as dedicated as Calvert Hall’s band parents.

‘A large family’
Despite the sweat and hours that go into it, marching band is about much more than work.
“We enjoy what we do,” said Mr. Ecton, who has been working at the school for seven years – as director for two years. He said he went into music because he loves it.

“I look at it as a way to strive towards excellence,” said the band director. He said he enjoys seeing the well-deserved improvement week after week in competitions as the students strive to achieve the highest musicality.

Mr. Ecton said the marching band helps the students develop a work ethic and the ability to work as a team. Mr. Bartgis agrees. He explained that marching band teaches students that you can’t be independent in the band; students have to work together to get better.
Brother Benedict also listed benefits from the band experience.

“First it increases their musicianship. They’re continually learning, often more than one instrument,” he said. “It increases their sense of comradeship. There’s a very nice spirit among our band members. They really function as a large family.”

“They put everything into it, and they’re rewarded for it,” said Mr.
Ecton. “That’s what it’s all about.”