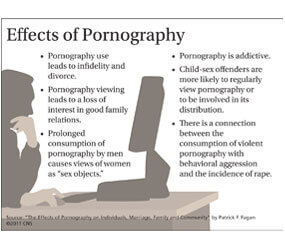 Trueman, who was the chief enforcement officer for the Justice Department’s child exploitation and obscenity section in the last year of Ronald Reagan’s presidency and for all four years of the George H.W. Bush administration, said that, before he became Morality in Media’s president, he was asked by its board chairman two years ago why pornography had become less of a priority.

“It’s easy to see why,” Trueman said he replied. “The Justice Department has moved this way down” on its priority list.

Thus began the War on Illegal Pornography, a coalition of 110 organizations that want existing laws to be enforced. Among coalition members is the Catholic Family Institute, which monitors United Nations issues.

“The reason we started the War on Illegal Pornography was to get the Justice Department to prosecute cases. But we never expected the Obama administration to be our champion,” Trueman told Catholic News Service. “The administration might take on a couple of cases, but the next administration – he or she, if it is a Republican – might be persuaded to take cases.”

Trueman said pornography has contributed to a coarsening of society.

Layden told CNS that the harmful effects of pornography are widespread. “It depends on what negative influence you want to look at,” she said.

“We’re talking about consumers at this point,” Layden said. “We haven’t even talked about the (sexual) partners, the performers, the individuals who are performing in pornographic activities, whether it’s video, strip clubs, the sexual exploitation industry, where sexual exploitation is what we’re selling.

“And I haven’t even named all the damage. I’m just touching the surface here.”

“They were asked questions like: How much time should a rapist spend in jail? What do you think of the women’s liberation movement? How many people do you think are having sex with animals? Group sex? Violent sex? Middle group was still in the middle. People who had seen the pornography reduced their support of the women’s movement by 50 percent,” Layden said. In response to another question, she added, “Rapists would spend about 50 percent less time in jail; that was true of the (porn-watching) females as well.”

Layden said she is doing a longitudinal study of the consequences of pornography over time, noting that researchers are limited to certain kinds of studies and research has to be cleared by an institutional review board to make sure a researcher doesn’t harm his or her subjects.