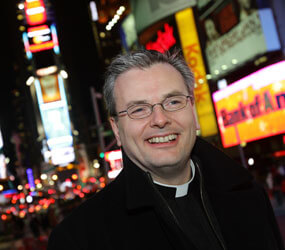 NEW YORK – The well-attended 11 o’clock Mass every Saturday night at St. Malachy’s Church might be the first clue that this not a typical parish.

Then there’s the all-volunteer, 25-voice, a cappella choir singing four-part harmony at the 11 o’clock Mass every Sunday morning: Most of the members have stage experience, some of it as recent as the night before.

And then there are the marriages celebrated on Mondays, the only day that Broadway shows are traditionally not performed.

It all makes sense because St. Malachy’s Church – the Actors’ Chapel is in the heart of New York’s theater district. Its parishioners include actors, stagehands, producers and many others drawn to live and work in the revitalized Times Square neighborhood of midtown Manhattan.

Father Richard Baker, pastor, told Catholic News Service that people are drawn to the church by “a welcoming spirit” embodied in community outreach and a vigorous music program. Father Baker, who has served as music commissioner for the Archdiocese of New York, said: “The music standards are quite high, but people feel welcome to participate.”

“There’s a real freedom here. I call it Catholicism,” he said with a smile.

St. Malachy’s is thriving today, thanks to the faith and persistence of clergy and parishioners who wouldn’t let the storied parish die, even as the neighborhood spiraled into decay 40 years ago. In fact, the parish became an active part of the effort to breathe new life into a wounded area.

According to Father Baker, Father Moore determined “if he was going to save the church, he’d have to save the neighborhood. He spent the first three years walking the streets, talking to everyone he met, prostitutes and theater owners,” and concluded the neighborhood and the parish could be turned around with a block-by-block reclamation effort.

Father Moore worked tirelessly with civic and business groups to start the 30-year Times Square redevelopment, which was formally completed in December 2010. The Herculean effort encompassed a 13-acre swath between Broadway and Eighth Avenue.

As a reminder to the unseemly denizens of the area, Father Moore arranged for the St. Malachy’s bell carillon to play “There’s No Business Like Show Business” one-half hour before curtain time every performance day. Father Baker said it was “a constant statement to the people who shouldn’t be in the neighborhood, who were not conducive to it being a healthy place, that the people who belonged here were staying and the theater district would emerge stronger than ever.”

Among Father Moore’s contributions was the development of Encore, a community service program for senior citizens, offering meals, shopping escorts and social events. Encore began as a parish outreach program and is now an agency of Catholic Charities of the Archdiocese of New York. It also includes Encore 49, a residence for formerly homeless, mentally ill elderly.

Father Baker built on Father Moore’s legacy of addressing the needs of the people in the neighborhood. Since he became pastor in 2004, people have moved into nine new high-rise apartment buildings, lowering the average age of his parishioners to 30 and creating a welcome demand for weddings and baptisms.

He has turned his considerable fundraising talents to developing a child care program for children of theater people. Father Baker said the proposed Broadway KidCare will provide affordable, flexible, quality care that fits unconventional work and audition schedules. The initiative has the support of Broadway union and commercial groups, and Father Baker said he hopes to identify a suitable Times Square area site for the center to open in 2012.

An ongoing project at St. Malachy’s is the purchase and installation of a 1935 Aeolian-Skinner pipe organ of American Classic design. The organ was removed from a church in New Jersey and will be restored with funds raised in the name of American composer Paul Creston, who was the organist at St. Malachy’s from 1934 to 1967. It is expected to be in place by Christmas 2011.

Mark Pacoe, director of music at St. Malachy’s, said the music draws people to the parish and he plans to institute a concert series incorporating local and national talent. In addition, he is already working on a 2012 musical production at Radio City Music Hall that will benefit St. Malachy’s and Covenant House, another organization based in Times Square.

St. Malachy, the first Irish saint, was a 12th-century bishop and healer credited with re-establishing Christianity on the island after it was decimated by the Vikings. He is honored at the church, but other holy men and women recognized as art patrons are included in the Artists’ Shrine at the back of the church. They are Blessed Dina Belanger and St. Cecilia (music), St. Genesius (actors), St. Vitus (dancers) and Blessed Fra Angelico (artists).

Father Baker said there are both dramatic and subtle signs that St. Malachy’s is making an impact in the neighborhood. On the showy side, he said the Easter Vigil in 2010 began with the lighting of the fire and a procession outside the church on 49th Street as playgoers were heading to the 8 p.m. start of the musical “Chicago” at the Ambassador Theatre next door.

More quietly, Father Baker said being present to people as they struggle with job uncertainty, career challenges and discouragement offers the opportunity to “promote the power of faith.” He said out-of-town parents call to ask him for help with young entertainers and, while he doesn’t get to the theater often, he is recognized by ushers and others who greet him with, “See you at Mass, Father!”

Ultimately, Father Baker redirected the credit. “God is doing this,” he said. “I don’t think I’ve had an original idea.”