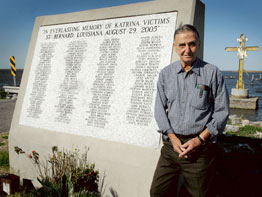 Uriel Little, 76, is alive and kicking.

What has Little scratching his head these days – two and a half years after he was evacuated from St. Bernard Manor before Hurricane Katrina hit – is a stately stone monument erected Aug. 29, 2007, by St. Bernard Parish, a civil entity, to honor the 137 St. Bernard residents who perished during the storm.

The name “URIEL LITTLE” is chiseled into the stone. Displaying a wry sense of humor, Little said it just isn’t so.

Little, a former member of St. Louise de Marillac Parish in Arabi, was evacuated to Texas two days before the storm. He spent many months at the Wynhoven Apartments operated by Christopher Homes, the New Orleans archdiocesan housing agency, and is now living in an assisted living apartment at St. Margaret’s Daughters Nursing Home in New Orleans.

How did Little feel when relatives told him about his being memorialized on the stone monument on the banks of the Mississippi River Gulf Outlet at Shell Beach?

“I didn’t think it was too good – but as long as it wasn’t true, that’s the main thing,” Little said, smiling.

Little’s sister, Sylvia Little Costanza, said she knew something was amiss many months after the storm when her brother’s name continued to show up in local newspaper stories chronicling who had died during the storm. She called the newspaper and even the St. Bernard Parish coroner’s office to make sure they knew her brother was still alive.

“We called the paper and told them we had him in an apartment, and they said they would take care of it,” Costanza told the Clarion Herald, newspaper of the New Orleans Archdiocese.

“Then lo and behold, we got a call from someone that his name was on the monument,” she said. “All I can figure out is that he was so familiar at St. Bernard Manor that some of the ladies couldn’t get in touch with him, and maybe they passed the word around that he was dead.”

Ricky Melerine, St. Bernard councilman at large, was the councilman for the district that pushed for the erection of the monument along with a striking 13-foot-by-7-foot stainless steel cross on a cement base set into the waters of the Mississippi River Gulf Outlet.

Melerine said he was “pretty sure” the list of the deceased came from the coroner’s office, and he was surprised the mistake is only now coming to light.

He said he has received a few calls from relatives who believed their deceased loved ones had been omitted from the list. Melerine had to explain that the monument included only those people who died directly from the storm, not from the aftermath.

“But this is the first time we have someone who is living who has to come off,” Melerine added. “We’ve got to discuss it with the people who built it. As far as taking his name off, it won’t be hard. I think we can go in there – with filler material – and polish it up.”

Costanza drove Little to the monument for the first time recently, and he kept his spirits high.

“I guess I’m going to get arrested for false advertising,” he said.