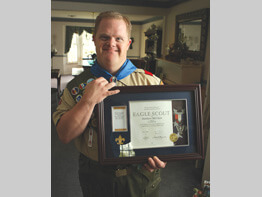 Early in Matthew McClain’s life, medical professionals told his parents he would need to be placed in an institution because of severe difficulties related to his Down syndrome.

The Annapolis couple, however, never accepted the prognosis that a healthy life for their son was “grim.”

“We said, ‘No, Matthew’s our son and he’s coming home with us,’ “ remembered Clif McClain, a retired obstetrician/gynecologist.

Matthew McClain didn’t just come home 41 years ago. Each day has been a triumph, none bigger than Oct. 19, when a Court of Honor Ceremony celebrated his ascension to Eagle Scout at the Knights of Columbus Holy Trinity Council Hall in Severna Park.

He is just the second Eagle Scout in the 28-year history of Special Needs Boy Scout Troop 216, which is sponsored by the Holy Trinity Knights Council 3413.

More than 150 friends, Eagle Scouts, co-workers and family from around the country came to toast Mr. McClain’s achievement.

“It was beyond all our hopes and imagination,” said Ruth McClain, his mother. “The synergy of all the people from all walks of life coming together was incredible.”

Two days before the ceremony, Mr. McClain was anxious. Wearing his full Scout uniform, his hands stroked his neckerchief and he looked to tie it. Asked what he would tell his guests during the dinner, he didn’t pause.

“I’m just going to speak from the heart,” he said. “It’s a family. … Scout spirit, that’s what it’s all about. Sometimes I get nervous.”

Mr. McClain attained Eagle status thanks to his work on the Knights of Columbus Hall, where he planted trees and smoothed over walkways.

Mr. McClain’s parents said that he functions at the level of an 8-year-old, and that he has made steady social progression. Matthew’s Eagle Scout journey took 23 years, as 35 merit badges are a reminder of his determination.

“That represents a lot of love, a lot of commitment,” Mrs. McClain said, looking at her son’s merit badges. “It’s overwhelming.”

Scoutmaster Jim Dunne, a member of Crucifixion parish in Glen Burnie, said of Mr. McClain: “Not many Boy Scouts make it to the Eagle. Matthew has persevered as much, if not more, than other Scouts.”

Deacon Charles H. Hiebler, the archbishop’s delegate to the western vicariate, helped form the special needs troop 28 years ago, when he was a professional executive for the Boy Scouts of America.

Mr. McClain, a Presbyterian, regularly attends Mass with Troop 216. Its members currently range in age from 21 to 71. Given the nature of some of the members’ disabilities, the troop makes available alternate activities, which challenge Scouts while giving them a feeling of accomplishment and leadership ability, according to Deacon Hiebler.

“It is extremely rewarding,” he said, “to see someone so challenged achieve the rank of Eagle Scout, knowing the obstacles that need to be overcome.”

Matthew currently works in customer service at a local grocery store after years in fast food restaurants and architectural firms. He has also participated in the Special Olympics locally, in both the winter and summer.

Each day is an adventure for the McClain family. Occasionally, Matthew will hide his merit badge sash, creating moments of hide and seek. His contagious laugh and sense of humor have left his parents marveling at their son.

“Matty has been a real joy,” Dr. McClain said.