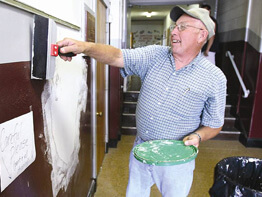 John E. Berg pointed into the distance ahead of him where the “old” cemetery could be seen on the slope of a hill on the 45-acres that encompass the parish of St. Joseph in Fullerton.
“My great-grandparents are buried there,” said St. Joseph’s maintenance supervisor who, together with three full-time staff members, cares for the buildings and grounds of one of the largest parishes in the archdiocese with a membership of some 4,500 households.
In the foreground lies the newer cemetery, and it is there that Mr. Berg’s grandparents and parents are buried.
“And I’ll be buried there too,” he said. “My wife, Lois and I have plots here.”
Mr. Berg, who lives about a mile from the parish, began his maintenance career with “St. Joe’s” in 1985 after retiring from another career, 21 years as a Baltimore County police detective. But it isn’t only that three generations of his family are buried in the parish cemetery that gives him and his work such a “wonderful sense of continuity,” as he put it, but that his father, John “Bo” Berg, was the maintenance supervisor before him. He started when St. Joseph was a relatively small country parish in 1942 and cared for it for 43 years.
“The day he retired, I came to work here,” Mr. Berg said. Monsignor F. Dennis Tinder, now pastor of Immaculate Conception, Towson, was then
St. Joseph’s pastor, and he encouraged Mr. Berg to take the position.
Mr. Berg remains friends with his former parish priest and continues to see him from time to time. “I still keep up with our priests,” he said. It is another part of the continuity.
But it doesn’t end there. Mr. Berg’s two sons went to the parish school as do three of his grandchildren now. And, of course, Mr. Berg and his wife went to the school too.
“This place is like home for me,” he said, “and I take care of it like it was my home.”
Which is no easy matter.
There’s the large church building, the parish offices, rectory, the five-acre cemetery and – most time consuming of all – the parish school which houses more than 500 students during the school year.
Whatever goes wrong in the parish complex, whether it’s electrical or mechanical, Mr. Berg and his staff (which includes three high school age boys in the summer) “fix it.” Rarely does he have to call for outside help.
And there’s always something to paint or re-paint, especially in the school, the site always needing the most attention.
“Let’s face it, when you’ve got a school with over 500 children in it, there are things that are going to break, every day, so we’re constantly repairing things,” Mr. Berg said.
As a child and then a young adult, Mr. Berg knew just about everyone in the parish, but as it grew a certain sense of intimacy was lost. Even so, Mr. Berg says St. Joseph’s remains a “very tight-knit” parish, rather like a large, extended family.
It might be a bit too romantic for Mr. Berg to think of his job as “tending God’s garden,” but because he treats it like his home there is an element of that sentiment in what he does. However, the former police officer is a realist
“It’s a job and you have to treat it like that or you’ll never get done because there are a million things to do,” he said. “You have to run a church like a business these days or things will go under.”
But then he turned his gaze toward the cemetery again.
“I walk out here among the tombstones,” he said, “and, you know, I knew so many people there, friends, family.”
And when Father Kevin T. Schenning, St. Joseph’s pastor, calls his maintenance supervisor at three o’ clock in the morning because of some crisis with the air conditioning or the boiler, well, “I’m there, I’m there,” Mr. Berg said, smiling.
As Joyce Thaler, director of the parish’s human resources and cemetery management put it: “We couldn’t survive without him.”