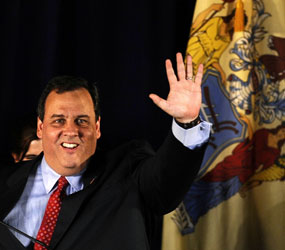 But in Washington state, it appeared that a referendum to uphold a law granting same-sex domestic partners the same rights as married spouses would be narrowly approved, 51 percent to 49 percent. The referendum had been opposed by Washington’s Catholic bishops.

The bishops also had opposed an initiative that would have limited government spending growth to inflation plus population growth, with excess revenue used to reduce property taxes. Voters, siding with Catholic and other faith leaders, rejected it by a 5-to-4 margin.

The religious leaders warned the initiative would have cut human services and made the state’s recession permanent.

In Maine after vote totals were announced on the same-sex marriage law, Bishop Richard J. Malone, head of the statewide Portland Diocese, said: “I want to thank the people of Maine for protecting and reaffirming their support for marriage as it has been understood for millennia by civilizations and religions around the world.”

“I am thankful for those who engaged in sincere and civil discourse on this matter of such serious consequence to our society,” he said.

“These past few months have served as a teaching opportunity to explain to parishioners and the wider community about how and why the church views and values marriage as the union of one man and one woman,” Bishop Malone added. “I trust that those who voted for such a radical change did so out of concern for our gay brothers and sisters. … While the Catholic Church will continue its commitment to work for the basic human rights to which all people are entitled, it remains devoted to preserving and strengthening the precious gift of marriage.”

The law had been put on hold after the petition drive was launched to repeal it. Voters have rejected same-sex marriage in each of the 31 states where it has been on the ballot. Only five states currently allow same-sex marriages to be performed: Iowa, Connecticut, Massachusetts, New Hampshire and Vermont.

In the District of Columbia, the Catholic Church and other backers of traditional marriage have lobbied the city’s lawmakers and rallied to urge that citizens be able to vote on a same-sex marriage bill that is now being considered by the City Council and expected to be put to a final vote by members by the end of the year.

The district’s charter forbids popular votes on laws that could be seen as restricting one’s rights. All district laws that are passed are subject to review by Congress.

Republicans won the two governor’s races up for grabs in 2009.

In Virginia, voters elected a governor whose pro-life views had come under fire from his opponent. Bob McDonnell, a Catholic, won with nearly 60 percent of the vote over his Democratic rival, R. Creigh Deeds.

Deeds had tried to exploit a master’s thesis McDonnell had written 21 years ago when he was a student at Regent University, run by the Rev. Pat Robertson, in which he outlined an political strategy that focused on many hot-button social issues. McDonnell focused on the state’s economy, job creation and transportation.

In New Jersey, incumbent Democrat Jon Corzine was ousted in a three-way race. The Republican, Chris Christie, a Catholic, won with 49 percent of the vote to Corzine’s 43 percent. Chris Daggett, an independent, saw his double-digit support melt away in the campaign’s waning days and wound up with 6 percent.

An election to fill a vacant U.S. House seat from upstate New York turned unexpectedly contentious in the campaign’s final two weeks. As Republican Dede Scozzafava was trailing in a three-way race with Democrat Bill Owens and Conservative Party candidate Doug Hoffman, many national Republicans threw their support behind Hoffman and urged Scozzafava – who supported legal abortion and gay rights, to the chagrin of many in GOP leadership – to bow out of the race.

She did but threw her support behind Owens, who claimed 49 percent of the vote to Hoffman’s 46 percent.

In Ohio, by a 53 percent to 47 percent margin, voters gave their OK to a state constitutional change authorizing casinos to be placed in Cincinnati, Cleveland, Columbus and Toledo. The amendment had been opposed by the state’s Catholic bishops.

Casino gambling, the bishops said, was “not in the best moral, social and economic interests” of the state’s citizens. “More persons and families will be seduced into financial hardship, rather than helped. More societal problems will be aggravated, rather than improved,” they added in a statement before the election.

By a margin of nearly 2 to 1, Ohio voters also passed a constitutional change to create a livestock care standards board, which the bishops supported, to regulate the treatment of farm animals. And by a margin of nearly 3 to 1, voters approved a $200 million bond issue to pay stipends to about 200,000 veterans of wars in Iraq, Afghanistan and the Persian Gulf. The Ohio bishops did not oppose the veteran stipend measure.

New York City Mayor Michael Bloomberg, a former Republican who has since become an independent, won a third term, with 51 percent of the vote compared to 46 percent garnered by his opponent, William C. Thompson Jr.

In a column for The Tablet’s Nov. 7 issue, diocesan spokesman Monsignor Kieran Harrington wrote that reaction to the newspaper’s decision to once again accept political ads has been “intense.”

Over the years, the paper’s refusal to run political ads and parishes’ decision to refrain from holding candidate forums has “led to an increasing marginalization of the Catholic voice in the public square,” the priest wrote. Now the paper must accept ads from all candidates, he added.

Regarding the Bloomberg ad, Monsignor Harrington said the diocese was grateful for the mayor’s assistance with regard to education but at the same time the bishop “profoundly” disagrees with the mayor’s support for legal abortion and same-sex marriage.

“The bishop doesn’t endorse candidates or political parties but he does seek to engage elected officials to promote the Catholic worldview and the interests of our community in Brooklyn and Queens,” the priest added.