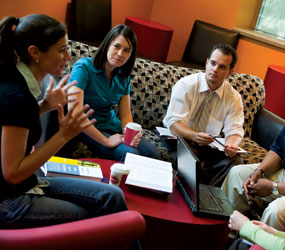 While Loyola University Maryland is known for having one of the best business schools around, it’s nice to get a little international recognition.

In the annual Financial Times rankings, which were released in October, its Loyola’s Sellinger School of Business and Management was recognized as one of the world’s top executive MBA (EMBA) programs. Financial Times, a London-based news organization, is considered a premier source for ranking EMBA programs.

More than 350 program around the world were eligible for the survey. Only 100 were ranked this year. Loyola is the only school in Baltimore and one of only two Jesuit universities that made to the list. This is the second year Loyola earned a ranking.

“We don’t chase rankings, because there are so many of them out there, and some don’t hold much significance,” said Karyl B. Leggio, Ph.D., dean of the Sellinger School. “But Financial Times is the ranking agency for executive MBA programs. This is very substantial. Not only did they base the rankings on what we offer, they also interviewed alumni about their experiences.”

Other U.S. institutions making the list were Columbia, the University of Pennsylvania’s Wharton School and the University of Chicago. Criteria included student salary increase, career progression based on seniority level and company size, and diversity.

With a student body that is 32 percent female, the Sellinger School is 14th in the nation in that last criteria.

“We put a lot of women in the classroom, and a lot of the leadership here is women,” said Leggio, dean since early 2008. “They’re great role models.”

“ ‘University’ connotes bigger and better, and there’s the prestige factor,” she said. “In Europe, ‘college’ is equivalent to our high school.”

Leggio is most proud of the fact that the Financial Times ranked Loyola No. 3 in the world for corporate social responsibility.

“It’s such a testament to what we do and what we do well,” she said. “It’s really exceptional. The Jesuit education encourages students to stop and think about the longer and broader impact of business decisions. It’s a more forward thinking approach — a holistic approach. I love that.”

In 1973, when Loyola began the EMBA, it was one of the first in the world.

While traditional MBA programs enroll students at all career stages, the EMBA is tailored specifically for experienced professionals with at least eight to 10 years of management or leadership experience.

“I’m about 20 years into my career,” said David Labuskes, a vice president at RTKL Associates enrolled in the EMBA program’s Class of 2011. “In typical MBA programs, most students are coming in right from their bachelor’s degree. I wanted to be in a program geared more toward people who are established in their career.

“With the executive MBA, there’s more of a focus on leadership and the kinds of challenges you face daily as a leader in your business.”

Labuskes is among a group of more than 20 students who attend classes from 8 a.m. to 5 p.m. on alternate Fridays and Saturdays. With summers off, their program requires two years of study.

Tuition for Loyola’s EMBA program is $65,000 for the class of 2012, which covers all fees, books, domestic and international field study costs and travel, and some meals. While tuition rates change yearly, tuition is fixed from the start of enrollment.

“I chose Loyola because of its reputation,” Labuskes said. “I’m getting an Ivy League education without the Ivy League price. I would absolutely recommend the program.”

For more information, go to loyola.edu/sellinger.