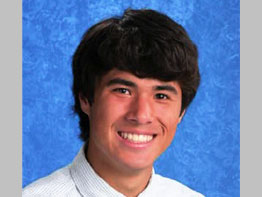 Inside the performance gymnasium of Loyola Blakefield, an eerie silence hung over a crowd of hundreds who packed the bleachers and rows of seats inside. Students, parents, teachers and strangers all felt compelled to be there.

The death of Dennis Woolford, a junior at the school, in a Sept. 26 car accident had brought the community together for a memorial service.

People were dabbing tears even before the service began. Only the sound of rain bouncing off open windows interrupted the muted scene.

“It’s a real honor and pleasure to have you all here tonight to join the Woolford family, to pray together and support one another in this time of great grief and tragedy,” Father Pesci said. “I want the Woolfords to know this is their home for as long as they want it to be.”

Sitting in the front row were Dennis’ parents, David and Enjeen. Over the next two hours, they listened as Dennis’ friends and teachers tearfully paid tribute to their son.

Upper school Principal Anthony I. Day said his challenge was “seeking that which enabled a community to find joy in the saddest of times.”

Friends recalled Dennis as someone who lived up to the school’s mission of being “a man for others.” They spoke of his boundless energy in the classroom and on the athletic fields, where he was a backup varsity soccer goalie, kicker on the football team and a midfielder in lacrosse.

One lifelong friend called Dennis his “action figure and superhero” rolled into one.

Another friend recalled how Dennis unabashedly loved Hannah Montana songs and often left his self-styled renditions of everything from pop songs to standards on his answering machine. As each friend walked off stage, others students waited to embrace them. Their sobs could be heard from the back of the gymnasium.

The emotion peaked when Dennis’ father and mother addressed the audience.

“We had 17 wonderful years with a great kid who lived his life to the fullest every day,” Mrs. Woolford said. “Every day that boy wanted to have fun. There are no regrets, only gratefulness that we had that wonderful boy for 17 years.”

Speaking to his son, Mr. Woolford yelled in a trembling voice: ‘Dennis, I love you! And I am so proud of you!’ “

At the close of the service, photos from the first minutes of Dennis’ life and final months were shown on a screen in the darkened gymnasium.

“What we can learn,” Mr. Woolford said, “from a 17-year-old boy’s untimely death is that a person’s life is truly not measured by the sports they played, how smart they were, the high school they went to, the company they work for, the size of your house, the people you know or the money you have in the bank.

“No, you are remembered for how you treat others.”