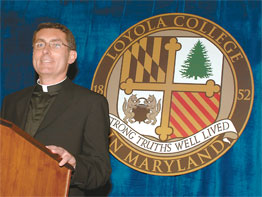 Changes in many forms have come to Loyola College in Maryland’s various campuses since it was founded 157 years ago by the equally evolving Jesuit order.

The one-time all-male institution became co-ed in the 1970s and also transitioned from a commuter school to a residential one.

Now, the school is heading into the second decade of the 21st century with one analytical eye on its present and another on the future. The school unveiled a strategic plan last fall that included one very big goal: to be the country’s leading Catholic comprehensive university.

“It really reflects where we are,” said Jesuit Father Brian Linnane, Loyola’s president. “Our goal is to really develop first-rate graduate programs.”

The strategic plan is a separate entity, Father Linnane added, and one that lays out other bold visions.

Father Linnane, Loyola’s president since 2005, said the school has constructed buildings time and again in recent years. Now, he looks to help grow its educational programs, especially its graduate offerings.

“We’re looking for a fully engaged Catholic community,” he promised.

Flexibility is one of the key tenets of the plan, which received its first test when it was announced last October. The school had talked with consultants, administration, faculty and students in gathering information, and then came the economic crisis.

It forced the school’s top decision-makers to look at what was a priority at the moment.

“We’re still moving forward quite boldly with our plan, but we see … helping our students is an important priority right now,” Father Linnane said.

That means Loyola is currently analyzing its financial aid resources. The school plans to scale back hiring of new administrators while hiring of faculty will increase by 11 over the next five years, Father Linnane said.

Both graduate and undergraduate pursuits are honored in the strategic plan.

The undergraduate program will see enhancements to the natural sciences programs as well.

On the graduate level, the school will launch a School of Education that will call to mind much of Loyola’s Jesuit foundations. The order, Father Linnane said, has long educated in the major cities of the United States.

“We want the school,” Father Linnane said, “to help us engage the educational community of Maryland and the city of Baltimore.”

Other graduate goals include earning national respect for Loyola’s clinical centers and further growth of the school of business, Sellinger, while enabling further education of current students.

Through it all, Father Linnane said, Loyola wants to be a major part of the surrounding community and stay true to its roots.

“We are going to continue to be a mid-sized institution with a highly personalized education that pays attention to the whole person,” he said. “That’s only going to be deepened.”