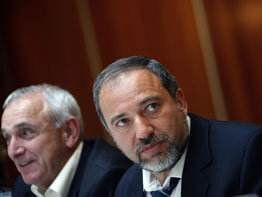 Lieberman’s ultranationalist platform includes redrawing Israel’s boundaries to transfer highly populated Arab areas to Palestinian control and the mandatory signing of an oath of loyalty for those Arabs remaining in Israel.

“We now have a fascist party in the Knesset and none of the large parties have spoken out against them. That is scary,” said retired journalist Atallah Mansour, a Catholic living in Nazareth. “With Lieberman having influence in the government, Israel is on a collision course with the United States.”

Mansour noted that U.S. President Barack Obama has indicated he wants to make significant changes in the way negotiations between Israel and the Palestinians are conducted. But, he pointed out, Lieberman exposes a strong stance against the Palestinians and has been quoted as saying he wants to wipe out the Palestinian militant group Hamas, which now rules the Gaza Strip after having separated violently from a coalition with Fatah, which rules the West Bank.

With no political party gaining a clear majority in the elections, it may be weeks before an Israeli government can be formed. It is now up to Israeli President Shimon Peres to decide which of the two top parties – Likud or Kadima – will be entrusted with building a coalition.

Neither Kadima, which according to final poll results won 29 seats in the Knesset, nor Likud, with 28 seats, have come out against the Yisrael Beitenu (“Israel Is Our Home”) Party.

“I don’t see any difference between Hamas and Lieberman,” said Wadie Abunasser, an Arab Catholic resident of Israel and head of a political think tank, the International Center of Consultations.

Abunasser noted that both Hamas and the Yisrael Beitenu Party refuse to recognize the rights of the other; both advocate the use of violence and decline to accept past agreements.

“The irony is that while everyone is proud of boycotting Hamas no one is talking about boycotting Lieberman. The election of such a person as Lieberman, who is corrupt, who is saying such things, raises a lot of questions of how decisions are going to be made in Israel,” he said.

Regardless of the outcome of the elections, said Abunasser, the future of the negotiations also rests on two other factors: what stance the United States ultimately decides to take and whether the Palestinians can present a united front following the division between the Hamas and Fatah factions.

He said not only is the rise of Lieberman’s party disturbing, but the enormous leap made by the Likud Party from 12 seats to 28 indicates a worrisome and clear shift to the right by Israeli voters.

“It is the largest ever increase of any party in Israel,” he said.

While it is most likely that a center-right coalition will be formed, there is still the possibility of an extremely conservative coalition taking the lead, said Abunasser. Regardless, the new coalition will be highly unstable with a single party able to topple it at any moment by withdrawing its support, he added.

Mansour said that with 12 political parties likely to have representatives in the Knesset “the government is like a broken glass shattered into a bunch of little pieces.”

“Not that it was much better before, but now it is even worse,” he said.

In the all-Melkite Catholic village of Mi’ilyah, in northern Israel, council head Elia Arraf clung to a thread of hope.

“It is not easy, but we all hope there will be peace,” he said. “Any government can make peace. (Former Prime Minister Menachem) Begin brought peace (with Egypt), and he was Likud.”