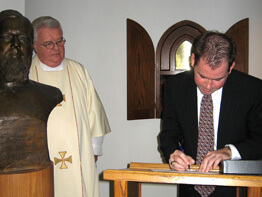 Tom Gibbons, a 35-year-old former parish council member of St. Matthew, Northwood, made first promises with the Missionary Society of St. Paul the Apostle, the Paulists, during an Aug. 4 Mass at St. Paul’s College in Washington, D.C.

In making first promises, Mr. Gibbons pledged to live for the next 12 months according to the society’s con¬stitution as he continues discernment for priestly ordination with the Paulist Fathers, a religious order of men founded in 1858 now ministering in 16 foundations throughout North America. The promises are renewed dur¬ing each year of formation, culminating with final promises the year before ordination.

Mr. Gibbons, a 1994 graduate of Loyola College in Maryland, Baltimore, worked as a Web developer at Catholic Relief Services before entering the Paulist Fathers.

For Mr. Gibbons, the novitiate year has been invaluable in “getting to know the people in this community and to observe and participate in the work the community does,” he said.