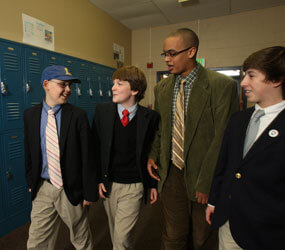 A tendency to be self-centered and rambunctious gives middle school boys a bad rap, but they may not be made of frogs, snails and puppy dogs’ tails after all.

The eighth grade at Loyola Blakefield in Towson has proven extremely supportive of classmates Joe Gorman and Matt Costello, who have leukemia and an inoperable brain tumor, respectively.

“It wouldn’t be expected,” middle school principal Gail Kujawa said, “that 14-year-old boys could be so intuitive about how to treat their buddies.”

They manage the big ‘C’ word with a few not-so-small ‘c’ words – care and compassion.

“This is not how we intended to spend this year,” Kujawa said, “but it has been an incredible one. The boys told me not to worry; they ‘Had it down. You have to do everything you can to make Joe and Matt feel normal,’ they said.”

During his chemotherapy, “Joe hats” were worn in support of their bald friend. On days he felt well enough to attend school, Kujawa hung a hat on her doorknob, signaling the class to wear theirs. Matt’s hats were chosen for the Under Armour logo resembling an “H” – for hope.

Joe said that the hats “have made a big contribution to making me not feel as left out.”

They have made get-well cards; arranged for Joe to enjoy some soccer field glory and created a Facebook page for Matt that counts 2,364 members. Classmate Danny Cameron told his father, Cam, the offensive coordinator of the Baltimore Ravens, about Matt, which led to him suggesting some winning plays and being featured on espn.com.

Through it all, the eighth grade has helped both boys keep up with schoolwork, and continue to pray before classes.

“Loyola has been phenomenal,” said Matt’s dad, Jamie Costello, with a quiver in his voice. The co-anchor of WMAR-TV’s Good Morning Maryland said that he and his wife, Donna, felt “horrible breaking the bad news. But Kujawa said, ‘We’ll handle it.’ “

“People are put on this earth for a reason,” said Costello. “Hers is to run the middle school at Loyola. She’s unbelievable.”

Returning to school in January, counselors gathered the middle school to break still more bad news, the Christmas week deaths of teacher Peter Beck and the father of eighth-grader Greyson Boozer, Chris, who had coached some of them in youth sports.

Kujawa said one boy asked, “Are we cursed,” as the group have dealt with other losses, including that of Loyola student Michael Destino as they entered seventh grade.

“They have dealt with a lot,” she said, “but they are very resilient.”

Processing illness and death, counselors can perform their jobs more effectively in an environment that allows folded hands and conversations about God. In the intimate setting of Xavier Chapel, boys sat in a circle to talk about Beck, their sixth-grade teacher, and write notes to his sister.

One student commented, that if this had to happen, “Loyola is the right place.” At a different school when a classmate had died, he said, “the counselors came in and we talked and cried. But here we talked and cried, and then we got to pray.”

Kujawa said that faculty “bent over backwards to help.” Teachers keep Joe and Matt up to speed; one science class added a lesson on chemo, blood counts and why patients lose their hair.

Through it all, the principal has been in awe of her eighth-graders. She hears skeptic ask how she can teach middle school, “and then this is the stuff the boys think of?” she said. “They have taught us more than we could ever teach them.”