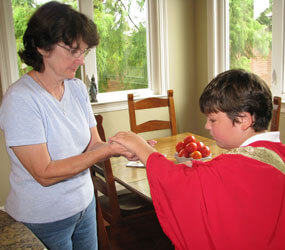 NEW ORLEANS – Dressed in red priest’s vestments, Ben de Boisblanc went through a preflight checklist for the Mass he was about to act out in his living room.

“I got the candles, the cross and the bread,” shouted Ben, 11, before launching into a verbatim recitation of the entire Liturgy of the Eucharist behind a tiny, cloth-covered altar.

The amazing reenactment, performed from memory, covered the preparation of the gifts, the lengthy eucharistic prayer and the consecration. After distributing Communion and wiping down his miniature chalice and paten, “Father Ben” dismissed his congregation with a final blessing – in Latin.

Acquainted with Ben’s in-home celebrations for years, parents Charles and Susan de Boisblanc are thrilled that their son is now sharing his love for the church with others – as an altar server at St. Louis King of France Parish in Metairie, alongside older brothers Charles Jr., 15, and Joshua, 13.

“When I first saw Ben serve, I think I cried through most of the Mass,” said Susan de Boisblanc, laughing that the only time her three altar servers clash is when they can’t decide who gets to ring the bells during the consecration. The family also includes a fourth son, 9-year-old John Paul.

“Our kids have really been immersed in their faith. They’ve been at Mass every week of their lives since they were born,” de Boisblanc said. “At our house and my parents’ house, it’s just always been a part of our lives.”

Ben, who was born with Kabuki syndrome – a rare congenital disorder that affects learning, speech and motor skills – has let nothing stand in the way of his dream of becoming an altar server. He got his wish last April at a Friday morning school Mass at St. Louis King of France.

Ben, who had the day off from St. Michael Special School and was seated in the pews with his grandparents, was itching to assist in the lead-up to the liturgy, recalled Ben’s grandmother, Pat Martinez.

“As soon as he saw Deacon Marty, Ben said, ‘I’m gonna go help set up.’ I said, ‘Ask (permission) first,’ ” said Martinez, who soon saw Ben placing the ciborium – the covered container that stores the consecrated hosts – in its correct pre-Mass position on the sanctuary table.

“Next thing I knew, Deacon Marty came to me and said, ‘We’re going to let Ben carry the cross,’ ” Martinez said. Expecting Ben to return to the pews after the procession, Martinez was thrilled to see Ben serve the entire Mass at the invitation of celebrant Father Bernie Terrebonne, pastor of St. Louis King of France. Ben has served Sunday Mass with his brothers ever since, usually the one celebrated at 9 a.m.

“I like pouring the water on Father Bernie’s fingers before the gifts,” said Ben, naming his favorite altar duty. His most challenging task? Keeping the weighty processional cross steady for the long walks up and down the main aisle.

Honing Ben’s remarkable memorization of the liturgy are EWTN’s weekday morning broadcasts of the Mass. On Sundays, Ben flips back and forth between the EWTN Mass and WLAE’s telecast of the Mass at St. Louis Cathedral, “because they both come on at 11,” said Susan de Boisblanc.

“Periodically he’ll say, ‘Mom, how do you spell benediction?’ Or we’ll pull up different Masses on You Tube,” said de Boisblanc, a moral theology teacher at Jesuit High. “He’s just drawn to it. He probably knows more theology than some of the kids I teach.”

On off days from St. Michael, Ben is an honorary student at St. Louis King of France, serving school Masses and visiting the office of Pamela Schott, school principal.

“(Charles Jr. and Joshua) really take care of Ben when they’re on the altar – it’s a true sibling love,” Schott said. “They’ll have their hand on Ben’s shoulder to make sure he knows what to do. They’re constantly watching Ben to make sure he doesn’t get in trouble, or fall, or get hurt.”

Last September the school family prayed daily for Ben when his swine flu turned into pneumonia. Ben, who was placed in a medically induced coma and spent two weeks at Children’s Hospital, almost didn’t make it.

“When he was feeling a little bit better, Ben came to our school Mass one Friday and we presented him with our student of the month award,” Schott said. “There wasn’t a dry eye in the church.”