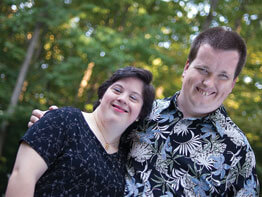 Jeannette Hudak said she was “scared to death” last year about the impending marriage of her now 35-year-old daughter Maria, who had always lived at home under the watchful eye of five older brothers and her parents.

Yet Mrs. Hudak was forced to cut the apron strings when Maria and Danny Rosner, 28, married in April 2005.

The Rosners, parishioners of St. Isaac Jogues, Carney, met by the salad bar at Oak Crest retirement community in Parkville and married after a two-year courtship.

Mrs. Rosner, who along with her husband, has developmental disabilities, recalled that the day they met, she returned home from work and announced, “Mom, I met this guy and his name is Danny and I think he likes me.”

Their first date was in Carrabba’s Italian Grill, said the couple, still clearly smitten as they stole starry-eyed glances at one another.

Mrs. Rosner is an extraordinary minister of holy Communion for St. Isaac Jogues, where she and her husband participate in the Special Friends group, sometimes making sandwiches for Our Daily Bread, or attending recreational events. The pale, smooth-skinned bride grew up in the parish as an altar server.

The lovebirds are considered a “success story” by the Arc of Baltimore, an agency which assists individuals who are mentally and physically challenged to live as independently as possible, holding meaningful jobs and participating in community life.

The agency helped Mr. Rosner set up Rosner Vending, a vending machine business which he operates two days a week with the help of his job coach, David Bazemore. Sporting a red Rosner Vending golf shirt worn over khaki pants, the groom admitted he never eats the snacks after purchasing vending supplies at Sam’s Club.

Three days of the week are spent “all over” Oak Crest performing janitorial services. When asked if he is a hard worker, he and his job coach simultaneously answered, “Yes!”

His black-haired bride, donned in an orange- and yellow-striped apron, has worked in the café at Oak Crest for 11 years, “which is incredible,” said her mother. Stocking silverware, tending to the salad bar, setting tables, and assisting residents with their trays are some of her tasks.

“I normally punch in 8:53 a.m.,” said Mrs. Rosner dutifully, pushing up her silver-framed eyeglasses. Standing up to begin her shift, she hugged her job coach, Laurie Gray, and reached up to her 5-foot 11-inch husband and held him tight. That hug had to last her through the day since she will miss him, she said, until they meet again at home.

Home for the duo is the top floor of a single family house in Nottingham, made possible through a state-run agency which handles residential situations for people like the Rosners. A house counselor oversees meal production and household responsibilities.

“You wonder if they grasp the idea of the sacrament of marriage,” commented Pat Rosner, Danny’s mother, and a parent advocate for Arc. “But they really seem to understand.”

Her husband, Jim Rosner, is “a strong legal advocate” for Arc and served on the board for 20 years. They are also parishioners of St. Isaac Jogues.

“We dust and vacuum together, and take out the trash,” said Mr. Rosner proudly. “We’re best friends. I love her.”