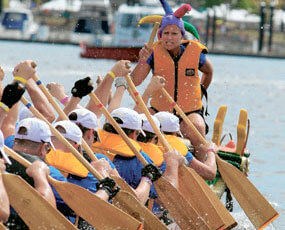 Much like the dragons the boats resembled, competition was fierce at the Dragon Boat Races Sept. 11 in Baltimore’s Inner Harbor.

The show was all in good fun and for a good cause, however, as approximately $500,000 was raised in support of Catholic Charities programs. The biennial event, which began in 1998, attracted 27 teams of 22 members apiece in three divisions and plenty of excitement.

The drummer for the City Hall team cheered on her teammates at the starting gate – “Let’s rock this! We can do it!” – as they prepared to race Legg Mason Global Management and the U.S. Air Force.

“We need to be here to share the glitter,” Murrow-Smoot said, explaining KPMG has been supporting St. Jerome’s for several years, this summer bringing books for all the Head Start children.

The competition wasn’t restricted to the water, as the event stage featured some otherwise hidden talents that were revealed with the rewording of pop songs.

Verizon team members, sporting hard hats and Our Daily Bread Employment Center aprons, sang and danced to their rendition of Michael Jackson’s “The Way You Make Me Feel,” replete with lyrics about how great the company feels to serve ODBEC.

Verizon, a platinum sponsor this year along with Harkins Builders, has made that level of commitment since the event’s inception, according to Mike Stedman, a Verizon manager and boat co-captain. Stedman said his team trained “on our own time” for several hours, once a week for eight weeks.

In addition, Stedman said, “We volunteer as a team to go to Our Daily Bread and serve lunch. We all love doing it. … We all have a purpose out here. Verizon and Catholic Charities share a bond.”

The Christopher Place/Bank of America partnership wrote and performed its own lyrics to the R&B song, “This Is How We Do It.”

Several teams showed exactly how it’s done, as Brown Advisory ruled Division A with the fastest time of the day, 1 minute, 35.54 seconds, ahead of M&T Bank and T. Rowe Price.

The best fight song/chant went to Bank of America.