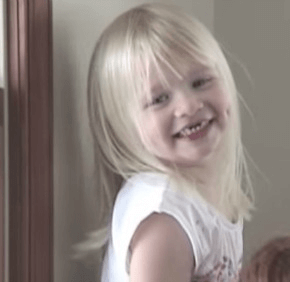 By Jennifer Williams
jwilliams@CatholicReview.org
This article was originally published April 27, 2004. Annie Cumpston’s 18th birthday would have been Jan. 7, 2015.
Six-year-old Annie McGann Cumpston’s vivid blue eyes dance with laughter as she playfully tosses back her head of corn silk blond hair and flashes a large gap-toothed smile for the camera.
This whimsical spirit is what friends and family of Annie, who was killed by a hit-and-run driver last year, hope will live on in the form of a community playground.
“Annie’s Playground,” which will be located on a section of a 200-acre site in Fallston owned by Harford County, will be designed by Leathers and Associates of Ithaca, N.Y. The nonprofit Annie Cumpston Playground Foundation is in the process of raising $240,000 for the project, which will be designed with input from children from St. Margaret (where Annie was a kindergartner) and Youth’s Benefit School in Fallston as well as Annie’s cousins.
“I truly think that’s so wonderful,” said Jane Dean, principal of St. Margaret. “There’s going to be a place at the playground where anyone who has lost a child can come and I think that is such a wonderful idea.”
The kickoff fund-raiser for Annie’s Playground will take place May 15 from 11 a.m. – 4 p.m. at Edgeley Grove Park, Fallston, the future site of the playground.
Mrs. Dean said the St. Margaret community, especially parents of the then-kindergarten age children, was deeply affected when Annie was killed in March 2003 as she left the circus in Baltimore City with her family. Mrs. Dean said people made contributions to the school in Annie’s name, others cooked meals for the family for months and still others made plaques or stained glass mementos in honor of Annie.
Mrs. Dean said she thinks that the family “has chosen so well this memorial for Annie.”
Annie’s sister Susie made the following video for her senior project at The John Carroll School in June of 2013.
“Annie was a delightful child and always had a smile on her face, with a big gap where her teeth came out,” said Mrs. Dean, who teaches physical education for kindergartners. “She was the all-American girl.”
Annie’s sister Susie, 9, attends St. Margaret, as does her younger sister Alice, 5, who is now in kindergarten. Madelyn, the youngest, is 2.
“Your best hope is that families can find some kind of good that comes out of a tragedy, which really you never really get over,” Mrs. Dean said. “We feel very blessed that the family in turn has established memorial gifts for the school.”
The past year has been difficult for the family, according to Annie’s aunt and godmother, Lorene Tompros who attends the Trinity chapel, on the grounds of Trinity School in Ellicott City.
She remembers how her niece used to take care of everyone, earning her the nickname, “Momma Annie.” She recalls how Annie’s favorite color was yellow, how she was a “hugger” and how she wanted every possible figurine on her chocolate frosted birthday cake last year.
There were some 900 people at Annie’s funeral, said Mrs. Tompros, a 1974 graduate of John Carroll School, Bel Air, (which also has a scholarship set up in honor of Annie), whose own children Adrianna, 9 and Evan, 10, were close to Annie.
This past fall, Mrs. Tompros visited her niece’s grave, located beneath a tree in a cemetery not far from St. Margaret, and planted 100 bulbs. She talked about how her brother Tom (Annie’s father), brought a big pumpkin to the site on Halloween and wrote messages to Annie on it. She said her brother and sister-in-law, Megan, a 1982 John Carroll graduate, spend a great deal of time there.
Although times have been difficult, Mrs. Tompros said faith has helped her to cope.
“You ask why and why and why and there are no answers,” Mrs. Tompros said. “Everybody said that God wanted her. I think man took her away and God accepted her.”
She said that at first, she would go to Mass and just cry.
But she has realized, “If you don’t have your faith and your family, then you can’t survive.”
“Faith makes you believe she’s in a better place and you will see her again,” said Mrs. Tompros, her aquamarine eyes welling with tears as she sat in the kitchen of her Ellicott City home.
The playground is a sign of hope for a family who doesn’t want their Annie to be forgotten.
“Speaking her name will not bring her back, but it’s music to my ears,” said Ms. Tompros. “Our biggest fear is that our memories will fade. We don’t want to stop talking about her just because she’s not here.”
While the playground is a bittersweet symbol of joy for the family, members of the community have shown they will not forget Annie either.
For 13 months, an anonymous donor kept open a guest book on the Web site of the Baltimore Sun.
Everyone from strangers to friends to Annie’s gymnastics teachers wrote in.
“Thinking about your family has broken my heart,” wrote one stranger. “I just wanted to tell you that a stranger has cried for your Annie today.”
A classmate of Alice released a balloon on Annie’s birthday.
“Everybody needs a balloon on their birthday, even in heaven,” the child said.
Mrs. Tompros plans to put together a memory book for family members.
As she stared out the window of her home, Mrs. Tompros said Annie “would just be so excited and surprised about the playground.”
“It will be a memorial to her, knowing the type of person she was and that she was loved so much.”
Want to leave a message about Annie for her family? Sharon Perfetti, a family friend, started a special page for Annie.
Also see:
Catholic Throwback Thursday: Celebrating the golden anniversary year at The John Carroll School
Creativity and caring helped define NDP senior, not the cancer that took her life
Dad’s kidney keeps daughter going
PrevNext