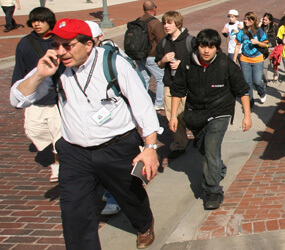 Mark Pacione has spent 24 years thinking about the Archdiocese of Baltimore’s future.

As the director of the division of youth and young adult ministry, he helped foster the formation of thousands of Catholics.

Pacione’s job changed June 15, but his mission remains the same, as he is now the associate director of schools planning for the archdiocese. He joins a blue-ribbon panel of education, government and business leaders, one that is charged with charting a new course for Catholic schools.

In February, Archbishop Edwin F. O’Brien created the panel to address the ailing state of schools. Enrollment has dropped precipitously since the start of the decade, with nearly 5,000 fewer students this school year compared to the 2001-02 school year.

With tuition continuing to rise during an economic downturn, archdiocesan officials are concerned about a further decline in enrollment. The archbishop asked the blue-ribbon panel to come up with a plan that is expected to alter the administration of schools. A final strategy is expected to be ready by May or June 2010.

“Mark has been a visionary leader for the young Catholic Church in Baltimore and has created a model for youth and young adult ministry for dioceses across the country,” Archbishop O’Brien said. “We are blessed to have someone so dedicated to the needs of young people.

“His unique gifts and commitment to the future of our church will bring great energy and vitality to both the planning and execution of the plan for a healthier and stronger Catholic school system.”

Pacione said he looks forward to working with Monsignor Robert L. Hartnett, executive director of schools planning, and the panel.

Pacione’s new position comes with a four-year contract. One year is set aside for planning, the next three for implementation.

The Baltimore native is no stranger to Catholic education. He attended St. Anthony of Padua School, Calvert Hall College High School in Towson, Loyola College in Maryland and The Catholic University of America.

He has taught at St. Anthony of Padua, St. Margaret School in Bel Air and schools in the Diocese of Arlington (Va.).

Throughout his tenure in youth and young adult ministry, Pacione worked with Catholic high schools and middle schools. He maintained a close relationship with Dr. Ronald J. Valenti, superintendent of Catholic schools.

“The challenge is huge,” Pacione said of his new position. “It impacts much more than just our schools, it impacts our church. We need to get this right. There is a good bit of concern about the schools. We are going to restructure in a way that’s going to be hard for us as a church. I’m excited we’re facing up to this issue.”

Dr. Valenti will lead a nationwide search for Pacione’s replacement in the young and young adult office.

“As much as I love youth and young adult ministry, my real passion is to serve the Archdiocese of Baltimore,” Pacione said. “I grew up in this diocese. I rejoice in its successes and hurt when things are not so happy. I want to help.”