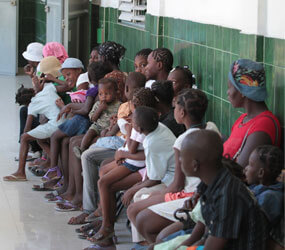 PORT-AU-PRINCE, Haiti – Yvrose Jacques uses her one leg to roll her wheelchair out of the hospital ward and onto the veranda at the LaKu LaPe Clinic to get a little fresh air and look up at the clear blue sky.

A smile crosses her face as visitors approach. She extends a hand for a warm embrace.

Never mind that her two-bedroom home was destroyed in the 2010 earthquake and that she, her 27-year-old daughter and her granddaughter now live in a tent, facing the heat of day and the tropical downpours with a thin layer of canvas over their heads.

“I cannot afford to build a new house,” she says. “I’m just waiting.”

Never mind that just weeks earlier, her life was in peril after she contracted cholera near the height of the epidemic that swept across Haiti.

Never mind that, as the effects of the water-borne disease subsided, her right leg began to swell. Then gangrene set in. Doctors discovered the blood flow in her leg was not normal and that they would have to amputate the limb at the knee.

Jacques was recovering at the clinic, run by the Missionaries of Charity Brothers, on the edge of notorious Cite Soleil. She cares for her granddaughter at the clinic so her daughter can go to work. Brother Rajit Kumar Dungdung, clinic director, thought that would be better than having Jacques stay in her tattered tent with the child.

The brothers who run the facility, an oasis in a community overrun with poverty and violence, minister in the tradition of Blessed Teresa of Kolkata. The clinic is part of an informal network of privately run health centers strung across Haiti that provide much-needed services in a country where health care options are few.

Brother Dungdung, 40, who worked alongside Mother Teresa in his native India, heads a team that includes several brothers and four novices who work in a neighborhood where basic health care is limited.

In some ways, LaKu LaPe Clinic operates much like a hospital. Patients, some with serious injuries, are treated in two wards – one for men and one for women. The wards have about a dozen beds each, allowing patients to stay as long as necessary to recover. Among patients staying recently were a man burned when the cologne he was using burst into flame from a nearby candle, a gunshot victim and a young woman with AIDS.

“I think they come here because they feel like it’s home,” Brother Dungdung says.

Hospitals in Haiti’s health care system are few – an estimated 30 for a population of 10 million. But plans are under way for two new facilities. One involves the Catholic Health Association of the United States teaming with Catholic Relief Services to rebuild the destroyed St. Francis de Sales Hospital in the center of Port-au-Prince. In Mirebalais, 35 miles north of the capital, Boston-based Partners in Health is building a 320-bed teaching hospital.

The new St. Francis de Sales Hospital will be the most modern in the Haitian capital. The $9.5 million, 200-bed facility will be built on the grounds of the original hospital, which was destroyed in the 2010 earthquake. The effort is being funded by 13 Catholic hospital groups with gifts up to $1.5 million; the Diocese of St. Petersburg, Fla.; and CHA.

Construction is expected to begin later this year and take up to two years to complete.

Sister Carol Keehan, a Daughter of Charity who is CHA president and CEO, said the project will allow the two American Catholic agencies to build a stronger partnership with Haitian doctors, nurses and health care workers in the delivery of health services.

CHA members also will share administrative expertise in areas such as management and purchasing and introduce modern practices that will encourage Haitian doctors who primarily receive their training overseas return home to work, Sister Carol said.

“So many doctors just don’t want to practice in Haiti because they can’t practice the way they were trained,” she explained. “We have this opportunity to maximize the presence of all the Catholic health care in Haiti. And with this new equipment and new facilities, the doctors will want to practice.”

Anna van Rooyen, who heads CRS’ AIDS response in Haiti, told Catholic News Service the partnership is designed to build a network that reaches across the entire Haitian health care system to provide care for all Haitians, “not just those who have the means.”

“The church has an opportunity to really impact the health infrastructure in Haiti by working on this network and continue to work in the public health sector as well. We need to share our lessons learned and our experiences so that we’re not only strengthening our own (Catholic hospitals), but also seeing the larger picture of Haiti,” she said.