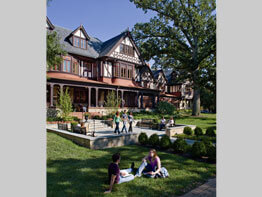 Loyola College in Maryland was recently recognized as one of the top higher education institutions in the country.

Loyola’s ranking was aided by its large alumni donor rate, reputation in the academic community and small class sizes.

Loyola, which announced Aug. 20 plans to change its name for the 2009-10 academic year to Loyola University Maryland, has been perched in the North master’s category top 10 for the last decade.

“Knowing that colleges’ and universities’ reputations among their peers play a significant role in the U.S. News and World Report rankings,” Father Brian Linnane, S.J., president, said, “I am very pleased that the Loyola educational experience remains one highly regarded by those throughout the higher education community.”

Loyola was also included in the “Great Schools, Great Prices” category where it was named ninth in the North region. The college was also mentioned in a new category called “Up-and-Coming Schools.” The magazine cited Loyola’s 77 percent graduation rate and high study abroad rate of 65 percent.

The magazine honored Mount St. Mary’s with the 26th spot among master’s universities in the North.

The College of Notre Dame maintained its master’s spot at No. 30 this year, which was tied with Mount St. Mary’s a year ago. It tied this year with two New York schools. Dr. Mary Pat Seurkamp, president, said the honor highlighted the top tier nature of the school while adding lists don’t always reflect the true strengths of a school.

“While many of us recognize the limitations of the ranking system,” Dr. Seurkamp wrote in a campus e-mail, “positive feedback from an external source is always appreciated.”

The 2009 issue of the magazine is available on newsstands.