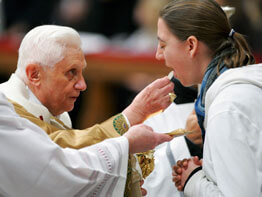 VATICAN CITY – The only way to bring about just and sustainable development in the world is to live in moderation and fix the vast inequities in the distribution of wealth, Pope Benedict XVI said.

“One cannot say that globalization is synonymous with world order; it’s anything but” that, he said.

“Conflicts for economic supremacy and the hoarding of energy and water resources and raw materials make it all the more difficult for those who strive on every level to build a just and supportive world,” Pope Benedict said.

The pope made the remarks at a Mass in St. Peter’s Basilica Jan. 6 on the feast of the Epiphany, which marks the manifestation of Jesus as savior to the world.

In his homily, the pope said people need hope in something greater than themselves, which would also lead them to “prefer the common good of all people (as opposed) to abundance for the few and misery for many.”

This great hope only can be in God who showed his human face with the birth of Christ, he said.

If people have hope in Jesus, then they can persevere in living a moderate lifestyle, he said.

Otherwise, “if this true hope is lacking, one seeks happiness in intoxication, the superfluous, in excess, and one ruins oneself and the world,” said the pope.

Pope Benedict said living in moderation “is not only an ascetic rule, but also a way of salvation for humanity.”

“It is by now obvious that only by adopting a sober lifestyle, accompanied by a serious commitment to a fair distribution of wealth, will it be possible to establish a just and sustainable model of development,” he said.

The pope recalled the New Testament account of the Magi.

He said the Wise Men demonstrated great courage by embarking on a long journey following a star, kneeling before a humble baby and offering him precious gifts.

The pope said everyone needs to become courageous enough to seek out God and make sure that courage is “anchored to steadfast hope.”

After the Mass, Pope Benedict gave his noonday Angelus address to those gathered in St. Peter’s Square.

From his studio window, the pope said that throughout history and even today men and women need guidance.

The Magi were guided by a star shining in the East, the pope said, asking what star is there today for people to follow to find God.

He said a “spiritual light is ever-present in the word of the Gospel, which today is also able to guide every person to Jesus.” While the mission of the church is to be a star guiding humanity, individual Christians, too, carry a “tiny light” inside themselves as they are faithful to their vocation, he said.

With that light, every authentic believer in Christ “can and must be of help to those he or she finds by his or her side and who perhaps are having trouble finding the road that leads to Christ,” he said.

The pope noted that the day also marked World Day of Missionary Childhood and praised the efforts of so many Christian children who help the church by spreading the Gospel and reaching out to those less fortunate.

The pope also extended a Christmas greeting to Eastern Christians who follow the Julian calendar and were preparing to celebrate the birth of Christ Jan. 7.