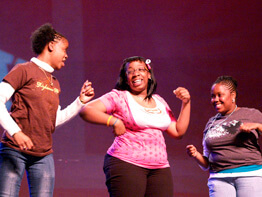 The March 1 all-day gathering, which preceded the March 2-4 congress, drew nearly 15,500 teenagers and young adults from 510 different youth groups. The theme was “Live Out Love.”

At a morning liturgy in the packed arena, Cardinal Roger M. Mahony of Los Angeles called Youth Day a “great joy” because it brought together so many thousands of young men and women committed to Jesus.

During an innovative three-part homily, teenagers from St. Louis of France Church in La Puente shared reflections on how the day’s Scripture readings pertained to their own lives.

Luis Arvizu said he had grown apart from his two sisters after his mother died a few years ago. But after his sisters, along with a friend, confronted him about his behavior, he started praying about the growing family split and realized how much his mother would want the family to stay close.

“I’m supposed to love and care for my sisters – make them laugh when they’re down, care for them and protect them,” Luis said. “Ever since my friend helped me out, I understood that I had to change my ways. Now I’ve been spending more time with them, talking to them whenever they need someone to talk to and making them laugh whenever they’re down.
“My sisters are the core of my life,” he stressed, “and without them I wouldn’t be anybody.”

Marcy Torres talked about what it really meant to be a friend. She said the hardest thing to do was to love somebody and have the courage to let them love you back.

“Real love is when you care about someone more than you care about yourself,” she explained. “I’m only 17 years old, so I’m probably as old or younger than most of you guys here today. But God has chosen me to stand in front of all of you today and tell you that he loves you, and don’t give up on him as he hasn’t given up on you.”

Cardinal Mahony said it was great to hear teenagers talk so openly about how God was working in their lives. Both accounts, he pointed out, spoke of what Jesus said in the day’s Gospel: “Ask and you will receive. Seek and you will find. Knock and the door will open for you.”

The cardinal then reminded the students they had their own experiences to deal with: “I just invite each of you, regardless of your experience – whatever good times or difficult times – our Lord is there waiting for you to invite him ever more deeply into your lives.”

The most popular workshop, which almost filled the arena, was about that old teenage bugaboo: sex.

Former crisis pregnancy counselor Pam Stenzel laid out in no-nonsense detail the medical, psychological, economic and moral consequences of having sex outside of marriage.

“Since God created sex, it’s awesome,” the Minnesota mother declared, stalking across the stage like a female version of the Rolling Stones’ Mick Jagger. “It was God’s idea, not yours. God wants you to have great sex. He does!”

Then she abruptly stopped, adding, “But he created it with a boundary. And when sex happens within the boundary for which it was created, sex is truly awesome. When it happens outside of that boundary, it’s horribly, horribly destructive.”

For the next hour, Ms. Stenzel pointed out that the number of known sexually transmitted diseases has grown from five in the 1950s to more than 30 today. She noted how infertility rises dramatically with a woman’s number of sexual partners. Moreover, she reported that the No. 1 indicator of poverty in the United States is the number of single-parent households, along with how young the mother is when she begins parenting alone.

In the 11 years that Mike Norman, associate director of the Office of Religious Education, has been coordinating Youth Day, the number of students attending the event has increased from around 10,000 to more than 15,000. This year, in fact, nearly 2,000 youths had to be turned away, he said.